ASUS made a grand entrance into the Ultrabook race with the Zenbook Prime UX31E, which brought a sleek design and lovely, high-res screen. That machine was one of our favorites in what was still a budding category, though we took issue with the shallow keyboard and uncomfortable touchpad. The company recently started shipping its new Zenbook Prime series, including the 11-inch UX21A we checked out a few months ago. But there's also a follow-up to the 13-inch UX31E on the market: the ASUS Zenbook Prime UX31A. This laptop offers a retooled keyboard, Ivy Bridge chips and a 1,920 x 1,080 IPS display, starting at $1,069. So how does the new 13-inch Zenbook stack up in a crowded field of high-end ultraportables? Join us past the break for the full report. %Gallery-162178% 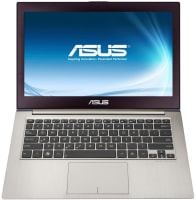 At first glance, the UX31A looks very similar to its predecessor. This Ultrabook sports the Zenbook line's signature spun metal lid, all-metal chassis and wafer-thin profile. The laptop feels pretty sturdy, though the lid is a bit wobbly, and the machine picks up scratches quite easily.

ASUS stuck with the original Zenbook design for the UX31A's chassis, but the keyboard is a horse of a different color.

While ASUS stuck with the original Zenbook design for the UX31A's chassis, open the lid and you'll notice that the keyboard is a horse of a different color. Rather than the white metal keys on the original UX31, this layout is black -- and ASUS added in backlighting. As always, though, we'll address the feel of the keyboard a bit later.

At 2.9 pounds and 0.3 inches thick, the UX31A is super light and quite manageable for jaunts on the road. Those vital stats compare favorably to other 13-inch Ultrabooks: even lightweights like the Acer Aspire S3 (three pounds, 0.5 inches) and the MacBook Air (2.96 pounds, 0.11 to 0.68 inches) are slightly heftier. Of course, the 13-inch Samsung Series 9 is always there to make perfectly thin systems feel chubby; at 2.55 pounds and 0.5 inches thick, it's still the gold standard in svelteness.

Unlike the 11-inch UX21A, the UX31A has room for an SD card reader, which sits on the left edge of the machine along with a USB 3.0 port and the combo audio jack. The right side of the system is home to another USB 3.0 connection, plus a mini-VGA port and a micro-HDMI port.

As we mentioned, ASUS gave the UX31's keyboard a complete overhaul, swapping the flat metal keys for a slightly rounded layout (with black buttons this time). The change isn't just cosmetic -- it offers 12 percent more travel and provides a much more comfortable typing experience than the previous-gen Zenbooks. We typed much of this review on the laptop, with the keys only rarely failing to register a press. ASUS also added backlighting, which is a welcome change. You can toggle the lighting on and off by pressing F3 and F4 (these are secondary functions, so you'll have to hit Fn as well).

We found the trackpad to be pretty unreliable.

Spoiler alert: the trackpad is one of the main things holding us back from giving the UX31A a resounding two thumbs up. We were unimpressed by the one on the UX31E, and though ASUS made some tweaks with the UX31A, it's still not great. When you click on a tab or an icon, for example, the trackpad will often open the adjacent item or simply not register the click at all. Scrolling isn't a problem, though other gestures like pinch-to-zoom stutter too much. ASUS seems to be aware of these issues, and has already released several updates to remedy them, but even with the latest drivers installed we still found the trackpad pretty unreliable. That said, the hardware itself feels nice; the touchpad's integrated touch button is neither too stiff nor too mushy.

The UX31A boasts a 1,920 x 1,080 IPS display, and it's truly one of the best panels we've seen on an Ultrabook. Viewing angles are wide, with images only washing out when you tip the screen ridiculously far forward or back. The matte finish is partly to thank for that, and it means glare isn't a huge issue. Colors look crisp and vivid, which makes watching movies and paging through websites a treat. That said, you may feel the need to zoom in on web pages and text-heavy documents, as the high pixel count makes everything appear smaller than usual. The UX31A is also available with a 1,600 x 900 screen, though we strongly recommend going for the higher-res option.

We weren't impressed by the UX31A's built-in speakers, which use Bang & Olufsen's ICEpower technology but fail to pack enough power for more than one or two people to enjoy music or movies. More than just being on the quiet side, though, sound on the UX31A sounds tinny and canned. Sure, that's not unusual for Ultrabooks, but we've seen several systems, such as the Toshiba Satellite U845W, provide more impressive audio oomph given their slim sizes, and it would be great if ASUS matched this laptop's top-notch display with a better listening experience.

The UX31A's 1.7GHz Core i5 processor, 4GB of RAM and a 128GB ADATA SSD pave the way to a solid showing in benchmark tests. Its score of 12,494 in PCMark Vantage is not only significantly higher than the last-gen UX31's 10,508, it's also better than the numbers notched by other premium 13-inchers like the Samsung Series 9. Still, the Acer Aspire S5, with a Core i7 CPU and dual 128GB SSDs, outpaced the UX31A by a slim margin.

On 3DMark06, the UX31A came in at 4,989. Integrated Intel HD Graphics 4000 is the name of the game for most Ultrabooks these days -- unless you step up to an NVIDIA-equipped configuration, that is -- and in general it offers good enough performance for casual gaming. Still, the UX31A's result is a tad lower than the Samsung Series 9's, while the MacBook Air beats it by nearly 1,000 points, but many other 13-inchers have scored even lower.

While playing through Batman: Arkham City, we saw frame rates in the 45 to 60 fps range, and World of Warcraft ran at 40 fps with graphics set to "Good." And the UX31A was no slowpoke in everyday use, taking a reasonable 20 seconds to boot, and swiftly handling our multitasking workload across two browsers and several programs.

The UX31A'S 50Wh battery logged six hours and five minutes on our video rundown test, which, as you most probably know, involves playing a video on loop with WiFi on and display brightness set to 65 percent. That's hardly a poor showing, but it doesn't quite take the cake from the 13-inch Samsung Series 9, whose seven-hour runtime is the longest we've recorded for a laptop in this class.

This machine has its fair share of bloatware, including a trial of McAfee Internet Security (you'll want to disable the pop-ups) and a suite of ASUS-branded applications such as Vibe Fun Center for finding music, games, apps and books. The laptop also includes the standard Windows utilities, including Media Center, DVD Maker and XPS Viewer, while Internet Explorer comes with a heap of distracting toolbars. We enjoyed using the UX31A a lot more once we pruned away these unnecessary programs. ASUS offers a one-year warranty with the UX31A, and that includes 24-hour phone support and accidental damage coverage.

Starting at $1,300, this year's 13-inch Samsung Series 9 is one of the best premium Ultrabooks you can buy right now. The impossibly slim, sub-three-pound design is a huge boon, as is its long battery life and fast performance. You're looking at a Core i7 CPU, 4GB of RAM and a 128GB SSD, and its matte, 1,600 x 900 screen is second only to the UX31A's IPS display.

You'll have to settle for a standard-res 1,366 x 768 display, but HP's Envy Spectre XT, starting at $1,099, offers comparable specs in a 3.1-pound chassis. The CPU, SSD and Intel HD Graphics 4000 are exactly what you'll find on the UX31A, but its software selection is more generous, as it ships with full editions of Adobe Photoshop Elements and Premiere Elements.

For $1,199 and up, the 13-inch MacBook Air offers a 1.8GHz Core i5 CPU, the same 128GB of solid-state storage and a 1,440 x 900 display. Though that panel can't compete with the UX31A's IPS technology and higher pixel density, the Air does offer a superior keyboard and touchpad.

When ASUS first released the UX31E last fall, we found plenty to like in its striking design, high-quality display and brisk performance. The addition of backlighting and a more comfortable keyboard -- not to mention the step up to Ivy Bridge and Intel HD Graphics 4000 -- makes the whole package considerably better.

But that doesn't mean the Zenbook Prime UX31A is now the best. To claim that title, it needs a more usable trackpad, above all else. We still think the MacBook Air is a better all-around ultraportable, as it offers a more comfortable touchpad and keyboard in a similarly attractive package, though we wish it packed an IPS 1080p display like the one on the UX31A. And though it's considerably more expensive, you might also be happier with the Samsung Series 9, which lasts longer on a charge, rocks an impressive display of its own and sports a more reliable trackpad. Still, given all the UX31A has to offer, chances are you'll be pleased with your purchase. Just evaluate your patience for temperamental touchpads before you pull the trigger.