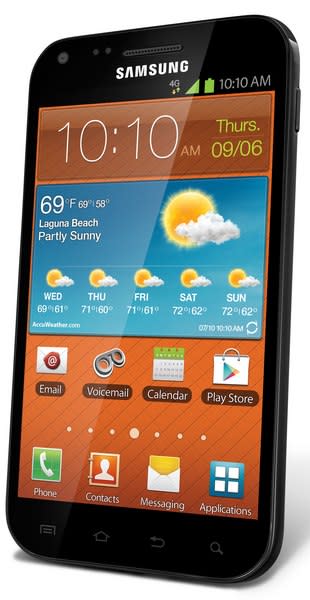 Boost Mobile is cranking out a trio of Samsung devices today, and the headliner is the Galaxy S II 4G. Essentially a prepaid version of Sprint's ever-popular Epic 4G Touch, the device will be all yours starting on September 6th for $360. As expected, it sports a 1.2GHz dual-core Exynos chipset, 8MP rear camera with 1080p video capture, 2MP front-facing cam, a 4.5-inch Super AMOLED Plus display, 1,800mAh battery and WiMAX and EVDO rev A connectivity. Fortunately, it will run Ice Cream Sandwich out of the box, and comes in both white and black options. Read on below for the full press release.

"Together with Samsung we continue to launch compelling device options from entry level to 4G-enabled smartphones to meet the evolving needs of our customers," said Andre Smith, vice president-Boost Mobile. "Launching the award-winning Samsung Galaxy S II 4G marks a defining moment for Boost's customers craving a portable entertainment powerhouse on a no-contract unlimited plan that shrinks to as low as $40 a month."

Offered for the first time on a no-contract carrier in the United States, the Galaxy S II 4G provides an unmatched entertainment experience for speed and hypermedia enthusiasts without the stress of a contract. Samsung Galaxy S II 4G will be available starting Sept. 6 for $369.99 (excluding taxes) at Boost Mobile's exclusive retail stores, select independent wireless dealer locations nationwide and at www.boostmobile.com with free shipping. It will also be available late September in select national retail locations.

This feature-packed Android smartphone will operate on Sprint's 3G and 4G (WiMAXTM) networks, bringing 4G speeds to Boost Mobile customers in 71 markets across the country with average upload speeds of 3-6Mbps and bursts of more than 10Mbps. As well as access to Sprint's nationwide 3G network which reaches more than 278 million people.

The Galaxy S II 4G, available in white and black, is loaded with a brilliant oversized 4.52-inch Super AMOLED™ Plus touchscreen, dual cameras and the Samsung Exynos™ processor, one of the fastest dual-core processors in the industry. The phone's rich color display allows, Boost customers to snap bright photos, record full HD video on the go, and browse the Web at blazing fast 4G speeds in 71 markets nationwide. For an additional $10 a month customers can take advantage of the phone's mobile hotspot capability, which can create a personal Wi-Fi network on the go, with connections for up to five Wi-Fi® devices.

In this article: boost, boost mobile, BoostMobile, exynos, galaxy s ii 4g, GalaxySIi4g, mobilepostcross, samsung galaxy s ii 4g, SamsungGalaxySIi4g, sprint
All products recommended by Engadget are selected by our editorial team, independent of our parent company. Some of our stories include affiliate links. If you buy something through one of these links, we may earn an affiliate commission.
Share
Tweet
Share