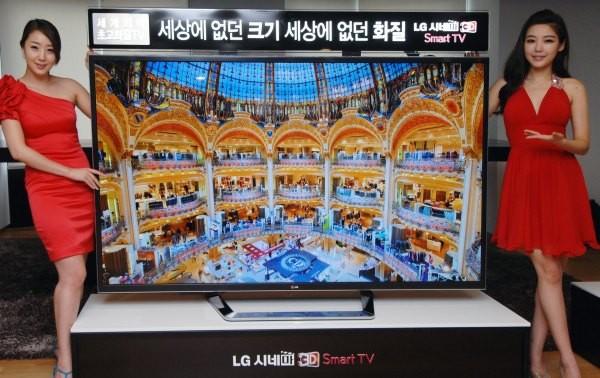 Just in time to completely blow away that puny flat screen you nabbed for your dorm room, LG has announced its 84-inch ultra high definition LCD TV is ready to ship in South Korea. The company put its first UHDTV up for pre-ordering last month, at a price of 25 million won, which currently converts to about $22,105 US. The 84LM9600 does 3D with LG's Cinema 3D passive glasses technology, however its ultra high pixel count means you're still watching in 1080p even with the resolution loss since it starts at 3,840 x 2,160, and also features "3D sound" with integrated 2.2 channel speakers.

The bad news of course is that finding actual 4K res content is practically impossible, despite recent work on standards and even some testing by broadcasters. Still, plug this into a BDP-S790 Blu-ray player, certain PS3 apps or just output the latest video you've shot and it should be worth the price of admission, assuming you're one of the (presumably) well-heeled Korean VIP customers that managed to snag one so far. If you're not then don't worry -- the press release (included after the break) reveals you'll have your chance once they start shipping worldwide in September, we plan to get our eyes on a production model at IFA 2012 in Germany.

"The 4K display market is still in its infancy but it was important for LG to claim a stake in this space," said Havis Kwon, President and CEO of LG Electronics Home Entertainment Company, "LG's UD 3D TV represents a whole new level of home viewing experience because it offers every advanced technology we currently have to offer."

Bringing this exciting new experience to the 3D entertainment arena, LG has equipped its UD 3D TV with CINEMA 3D technology to ensure the impressively large display provides the most immersive viewing experience possible. 3D Depth Control allows viewers to fine-tune the "distance" between near and far objects on the screen for a cus-tom 3D experience. The 3D Sound Zooming feature then analyzes the on-screen objects to generate sound according to their location and movement.

LG's newest Magic Remote allows users to intuitively access and navigate the Home Dashboard. LG's Smart TV ecosystem now includes approximately 1,400 apps and ac-cess to a growing community of premium content services such as 3D World with a wide array of movies and games. Even more media content can be accessed via portable devices such as laptops, mobile phones, tablets and flash memory drives using Smart Share Plus. The imbedded 2D to 3D conversion engine expands the availability of 3D content and Dual Play takes head-to-head game play to a whole new level by allowing opponents to simultaneously see different images on the same screen. With Dual Play, split-screen gaming is a thing of the past.

LG's UD 3D TV also features a 2.2 Speaker System consisting of two 10W speakers and two 15W woofers, which reinforce the sound to produce a lush audio experience that perfectly complements the extraordinary visuals produced by the massive screen, creating a theater-like experience in the home.

LG's 84-inch UD 3D TV will roll-out in North America, Europe, Asia, and Latin America starting in September. Visitors to IFA 2012 will be able to experience the TV for themselves at the LG Electronics stand in Hall 11.2 of Messe Berlin.

In this article: 2.2, 3d, 3d sound, 3d tv, 3dSound, 3dTv, 4k, 84-inch, 84LM9600, cinema 3d, Cinema3d, hdpostcross, hdtv, ifa, ifa 2012, Ifa2012, lcd, lg, tv, uhdtv, ultra high definition, UltraHighDefinition
All products recommended by Engadget are selected by our editorial team, independent of our parent company. Some of our stories include affiliate links. If you buy something through one of these links, we may earn an affiliate commission.
Share
Tweet
Share