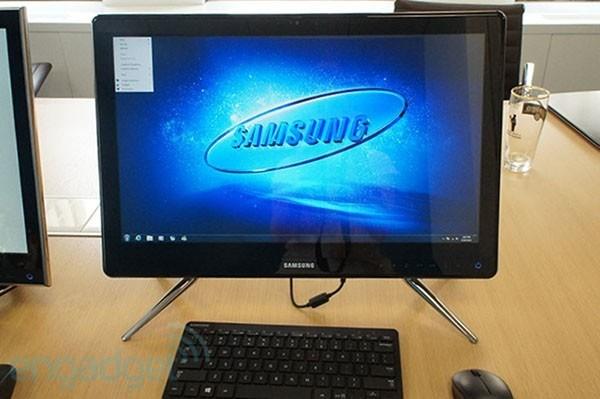 Samsung teased a Series 7 all-in-one running Windows 8 -- on a 10-point touch display -- at Computex in June, and today the machine gets official with pricing and specs. The Series 7 will be available in 23- and 27-inch flavors, both of which run Microsoft's latest OS on a 1080p touchscreen. The setup includes a redesigned keyboard, which is small enough to tuck under the display's metal stand, and the AIOs will support gesture recognition. The 23-inch Series 7 costs $1,099 and runs a Core i5 CPU with 6GB of RAM, 1TB of storage and Intel Graphics 4000. The 27-inch model offers a Core i7 processor, 8GB of RAM, 1TB of storage and discrete AMD Radeon HD 7850M graphics, all for $1,699.

In addition to refreshing its Series 7 machines, Samsung is introducing the 21.5-inch Series 5 all-in-one, which it describes as a "kitchen-style PC." Its legs are on either end of the display, leaving room to stow the keyboard under the screen and freeing up your desk (or counter) space. The Series 5 will go for $749, and it includes a Core i3 processor, 4GB of RAM and 500GB of storage. All three AIOs have two USB 3.0 ports, three USB 2.0 connections, HDMI and a media card reader, and all will go on sale October 26th. You know the drill -- head past the break for our hands-on photos.