Samsung Series 5 Slate reaches out and touches the FCC 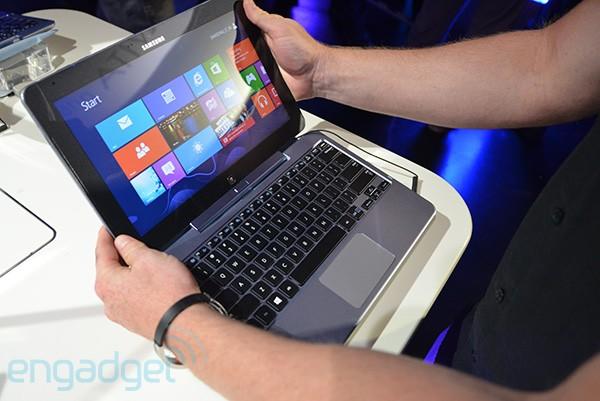 And hey, what's a Windows 8 tablet without a docking station? Sure enough, Samsung was showing off a snazzy one tonight that turns your bright and beautiful ATIV Smart PC (which is a bit chunkier than its brother) into a notebook. The tablet slots into the top of the keyboard dock, with the Windows 8 button obscured slightly by the top of the dock. The device does look a fair amount like a netbook when it's firmly nestled inside. But we have to say, the quality of the dock doesn't match the beauty of the tablet itself, the plasticky bottom clashing with the brushed aluminum backing, particularly where the lip shows up slightly on the rear of the device.

When using the dock, you're likely going to spend most of your time in the classic UI -- and when you want to switch, you can just hit the button at the top of the dock to release the tablet from its docky prison. The buttons and trackpad feel a bit like a low-end netbook, and we had to do some fiddling to get that mouse across the desktop. We're hoping that Samsung will either release a slicker version or we'll be seeing something from a third-party manufacturer. In the meantime, the dock feels more like a second home for the tablet, best saved for those rare occasions when you'll need to do, say, some serious word processing.

15
In this article: ativ smart pc, ativ smart pc dock, AtivSmartPc, AtivSmartPcDock, dock, hands-on, ifa, ifa 2012, Ifa2012, keyboard dock, KeyboardDock, samsung, samsung ativ, samsung ativ smart pc, SamsungAtiv, SamsungAtivSmartPc, slate, tablet, windows 8, Windows8
All products recommended by Engadget are selected by our editorial team, independent of our parent company. Some of our stories include affiliate links. If you buy something through one of these links, we may earn an affiliate commission.
Share
Tweet
Share