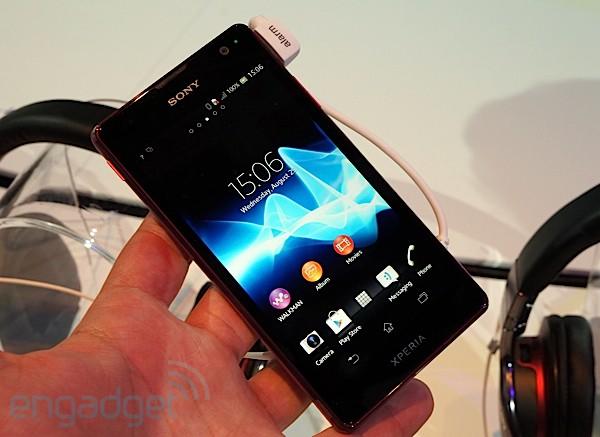 Sony just wrapped its IFA 2012 press conference, but not before ushering in three new members to its Xperia mobile line. The breadwinner of the pack, the Xperia TX, is the company's new smartphone flagship, outfitted with a 4.6-inch 720p HD display powered by Mobile Bravia Engine, 13-megapixel rear camera capable of sleep-to-snap fast capture and NFC functionality. We got a chance to handle the very vibrant metallic pink version of the device, so follow on after the break for our first impressions.

First things first, when you pick up this Android 4.0 ICS handset you notice its extreme lightness and that's because the TX weighs in at 127 grams (about 0.28lbs). Though this is undoubtedly the company's premium device (the T announced on stage is the Germany-only model), it has neither that appearance nor in-hand feel. That could be due to its slim profile, but there's also a disconnect between its high-end specs and actual performance. In our brief time with it, we noticed an extremely visible lag when attempting to rotate the home screen from portrait to landscape and that same sluggishness was evident when we attempted to access the app drawer.

Lest you think this is a quad-core affair, in keeping with its high-profile debut, it's not -- there's a dual-core setup under that shiny shell clocked at 1.5GHz. And as we mentioned above, it could do with some heavy optimization. We didn't have a chance to check out the device's NFC transfer capabilities, which Kaz Hirai touted during the announcement, nor its 13-megapixel rear camera, but be sure we'll have plenty more to say when final review units land in our hands.

In this article: Android, hands-on, Ice Cream Sandwich, IceCreamSandwich, IFA 2012, Ifa2012, mobilepostcross, Sony, Xperia, Xperia T, Xperia TX, XperiaT, XperiaTx
All products recommended by Engadget are selected by our editorial team, independent of our parent company. Some of our stories include affiliate links. If you buy something through one of these links, we may earn an affiliate commission.
Share
Tweet
Share