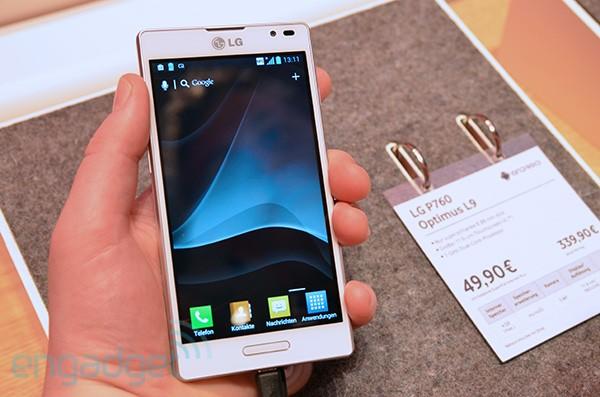 Thought LG didn't have any more to add to the L-Style series to offer the world? Behold the L9. Announced yesterday, the device made an appearance on the IFA show room floor this week, boasting a big and bright 4.7-inch IPS display that makes its brethren look downright shrimpy by comparison. In spite of the display size, the phone feels light, with an 8.9-millimeter profile.

It's important to note here that, in spite of being the king of the L-Series, it's still part of a budget lineup, and as such, the phone's body feels a bit plasticky, and the textured rear had a bit of trouble staying snapped in place in the two models (black and white) that we played with. Specwise, we're talking a 1GHz dual-core processor, 1GB of RAM inside, 4GB of storage (expandable via a microSD slot) and a 2,150mAh battery. The handset's rocking Ice Cream Sandwich (4.0.4, to be precise).

The handset's got a fairly nice bezel, with the front-facing camera on the top and a home button on the bottom, flanked by illuminating back and menu touch buttons. A larger, 5MP camera is located on the rear of the device, above the flash. Vodafone has the handset priced at €50.90 subsidized and €340 unsubsidized. Peep a video of the handset, after the break.

0
In this article: hands-on, ifa, ifa 2012, Ifa2012, l9, lg, lg optimus, lg optimus l9, LgOptimus, LgOptimusL9, mobilepostcross, optimus l9, OptimusL9, video, vodafone
All products recommended by Engadget are selected by our editorial team, independent of our parent company. Some of our stories include affiliate links. If you buy something through one of these links, we may earn an affiliate commission.
Share
Tweet
Share