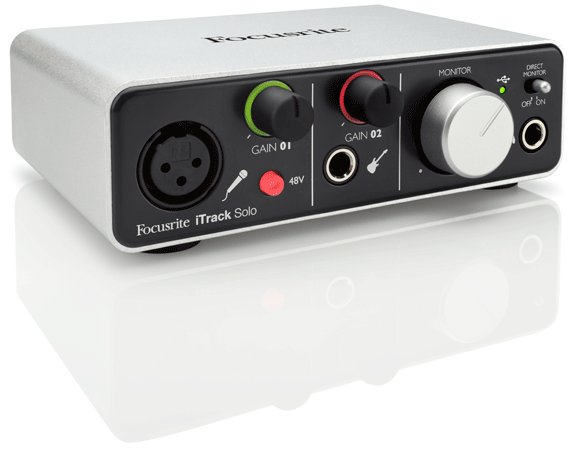 There's a stack of different plugs, cables and connectors aimed at piping sound into your iPad, but when studio-stalwart Focusrite makes one, we pay attention. The iTrack Solo is a two channel interface compatible with the iPad, as well as your Mac or PC, offering mobile recording all the way up to 24-bit / 96kHz. The onboard preamp is the same as used in the brand's flagship Liquid Saffire 56 interface, and there's phantom power for microphones. As well as the mic-in there's a quarter-inch input for guitars etc., as well as a chunky volume control for monitoring. Front "halo" indicators change from green to red if your recording levels go too high, and the aluminum casing should prevent it from getting damaged at the bottom of any gig bag. Once you've created a masterpiece in Garageband (or other recording app), you can use the line-level phono outputs to run it through your sound system of choice. Sound like something you can get down to? You'll be able to get your hands on the iTrack Solo starting next month, and it'll set you back $160 at your local dealer -- in the meantime, you can jam on the PR after the break.

Record guitar and vocals with a Focusrite mic preamp

With a quarter of a century of experience building legendary pro-audio equipment for top recording studios around the world, leading UK-based pro-audio manufacturer Focusrite turns its attention to recording on the iPad with the launch of the new iTrack Solo – a compact, rugged 2-channel interface for the iOS platform. It is also fully compatible with Mac and PC computers.

Focusriteʼs iTrack Solo is a dual-input audio interface designed for recording instruments
and vocals, bringing Focusrite versatility and no-compromise sound quality to the world
of iPad audio recording for the first time. iTrack Solo is the perfect companion for any
singer/songwriter wanting to take their demos to the next level – with audio quality thatʼs so good, they can be used in the final mix. The interface is compatible with GarageBand and other popular recording apps, and it can be used on a Mac or PC with up to 24- bit/96kHz digital performance.

iTrack Solo features a professional, low-distortion, low-noise Focusrite microphone preamp as used in Focusriteʼs flagship Liquid Saffire 56 interface. Phantom power allows the use of top-quality studio microphones, and alongside the microphone input on the front panel
thereʼs an instrument input thatʼs perfect for guitar and bass, along with the very best in digital conversion for the ultimate in quality. With its rugged unibody aluminium chassis, itʼs perfect for recording guitar or keyboard and vocal on the go.

Owners of Focusriteʼs popular Scarlett 2i2 USB interface will find the layout and features quite familiar – in fact iTrack Solo is based on the proven technology found in Focusriteʼs existing range of computer audio interfaces. Focusriteʼs signature "halo" indicators around the input knobs let you know if you are recording at the correct level (green) or at too high a level (red). Thereʼs a large monitor knob that controls the output level. Monitoring can be switched to listen to your recording signal against your backing track without incurring off-putting latency introduced by your music software.

In this article: apple, audio input, audio interface, AudioInput, AudioInterface, focusrite, focusrite itrack solo, FocusriteItrackSolo, garageband, guitar, input, IOS, ipad, itrack solo, ItrackSolo, mac, pc, preamp, sound card, SoundCard, tablet, video
All products recommended by Engadget are selected by our editorial team, independent of our parent company. Some of our stories include affiliate links. If you buy something through one of these links, we may earn an affiliate commission.
Share
Tweet
Share