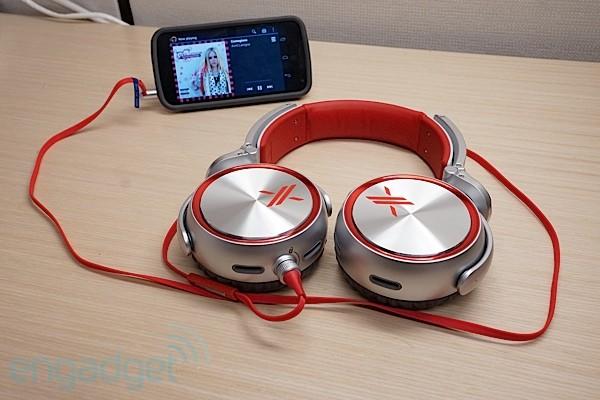 We're still wrapping our heads around this, but Sony and Simon Cowell have officially decided to join the celebrity-endorsed headphone bandwagon. Dubbed as the MDR-X10, the X Factor-themed cans are certainly late to the party, but the vibrant red and silver color theme will ensure they get noticed -- and we're not saying that's a good thing. $300 snags you the extra-sparkly circumaural earmuffs, an even more sparkly case and a duo of flat, tangle-resistant locking cables (one of which features a "made for iDevice" inline remote and mic). Unsurprisingly, the X10 is geared toward pumping out gobs of bass, being essentially a re-badge of the likes of Sony's XB800 from its Extra Bass headphone lineup. We had the opportunity to give Cowell's new headgear a fair amount of listening time, so jump past the break where we'll judge its brief audition. The headphones may be rather large, but they're extremely pleasant to wear thanks to the design of the earpads. A massive amount of memory foam engulfed this editor's ears, making for a seal that could easily stand up to NYC's subway system and blocking noise as well as -- if not better than -- options like Sennheiser's Amperior. What's interesting here is that the headphones have an around-the-ear fit but the pads are totally flat, leaving a generous amount of space for your cartilage to float inside without getting pushed against the drivers' grills. That said, the headband has almost no padding, but it doesn't detract from earcups; the headphones feel very light and well-balanced on the head.

In terms of build quality, our unit doesn't exhibit any creaking or squeaking, but it still manages to feel incredibly cheap -- the mixture of lightweight plastics and faux metal coloring just doesn't do the X10 any favors. If we're blunt about it, the X-Factor theme here really makes for an ugly choice of headgear. Beyond that, it's worth noting that our unit is an early run of the product, but we were surprised to find that even on the headrails -- which adjust exactly like the PS3 Wireless Stereo Headset -- there are some slight gaps near the sections that are screwed together. Some areas could use some fine-tuning to match the inflated price if this is how the retail units will be constructed. That said, the joints on which the earcups swivel and fold for storage functioned without any hiccups. Further, we're happy to note the that cables don't send too much noise back into the earcups while walking, and they end in right-angle plugs. The sections tips are quite large, but the actual plugs are still skinny enough to plug into our phones with cases affixed.

Lastly, that leaves us to discuss the sound quality. As mentioned, the X10 is a close relative to Sony's Extra Bass lineup. It was clear how focused the cans are for bass-lovers from the first few seconds of listening. We can't yet confirm if it's due to the bass vents on the bottom of the earcups, but the headphones thankfully don't sound bloated or tubby despite the well-defined bass emphasis. Unsurprisingly, however, the extra low-end kick means that treble takes a noticeable dip in its presence, meaning guitars and the like tend to sound veiled without EQ. A key point to note, however, is that we never felt that the sound got extremely muddy or distorted -- it's just a voicing that's clearly geared toward pop and electronic tracks. Still, the slightly-lacking definition of the highs may frustrate those who prefer the likes of cymbals to sound as life-like as possible. If we had to make a call, we'd say anyone craving lots of low-end without minimal sacrifice of quality in the rest of the mix might have a set to consider. Sony has yet to confirm whether Simon's variant is voiced differently than its standard XB models, but assuming it is, we'd be remiss not to remind you that they sport the same design with a less ridiculous color scheme, priced from 40 to 150 euros ($51 to $192).

SIMON COWELL TEAMS UP WITH SONY TO CREATE X HEADPHONES FOR THE TRUE MUSIC LOVER
Allowing Listeners to Hear Music Exactly the Way an Artist Intended It to Sound
SAN DIEGO (September 10, 2012) - Sony today unveiled the X Headphones in collaboration with Syco Entertainment, a global joint venture between Simon Cowell and Sony Music Entertainment. Combining Simon Cowell's expertise seeking perfection in music with Sony's legendary audio engineering, the new X Headphones offer music lovers the truest sound reproduction along with the utmost in style and quality.
Sony has always been committed to extraordinary sound performance and together with Simon Cowell, Sony sound engineers were able to deliver an unprecedented level of audio performance to match Cowell's high level of excellence for finding the right sound and style.
"I chose to make a set of headphones with Sony because I simply wanted something better than what is in the market today," said Cowell. "I've tried all of them, literally every single one. Sony and I set out to create the best headphone in the world. We are absolutely blown away by these. With the X headphones, it's like being in the recording studio when the records are made. The sound is that clear."
"Our X Headphones are for the true listeners, the music fanatics who share Sony's uncompromising passion for music and precision in sound," said Andrew Sivori, vice president of the Personal Audio Division at Sony Electronics. "Created by Sony and Simon Cowell, the new X Headphones deliver an amazing listening experience wrapped up in a cutting-edge design for the ultimate in self-expression."
Rich and Powerful Sound
The premium X Headphones were engineered with an enhanced acoustic configuration for a high level of noise isolation and exceptional bass response. Featuring precision 50mm drivers, they deliver a rich, full-range audio experience that's ideal for all popular music genres.
With their pressure-relieving memory foam ear pads, the X Headphones conform to each listener's unique ear shape, providing a highly effective acoustic seal. Besides reinforcing the headphones' powerful sub-bass reproduction capability, the ear pads deliver a supportive, wrap-around feel, ideal for long-term wearing comfort.
Head-Turning Design
The X Headphones were designed to look as great as they perform. Sporting aluminum headbands, swivel mechanisms and end caps, they project an image that's as strong and solid as their sound.
Their dual folding style allows the user to swivel the noise isolating ear pads for listening flexibility, as well as conveniently fold the headphones for hassle-free portability. Once folded, they easily slip into their included carrying case.
Featuring grooved serrations on its surface, the X Headphones' detachable cord provides an innovative design that eliminates friction between cable surfaces, reducing the incidence of frustrating tangles. For iPod®, iPhone® and iPad® users, the X Headphones include an Apple® 3-button control with a microphone, track, and volume control functionality.
The X FACTOR
The new X headphones will be showcased at the star-studded premiere event of THE X FACTOR in Los Angeles on September 11. As the official headphone partner of THE X FACTOR, the new X Headphones will be seen in episodes throughout the season as well as featured in a key in-show integration.
Pricing and Availability
The X Headphones will be available September 10, 2012 at Sony Stores online at http://store.sony.com, in Sony Stores from September 15th, and other authorized retailers nationwide by the end of the month for $299. For images and information, please visit www.sony.com/news.
Please visit www.sony.com/XHeadphones or Follow #SonyX on Twitter for the latest X Headphone news. Please also stay tuned to the Sony Blog for up-coming opportunities to win your own X Headphones

The X Factor launched in 2004 in the UK. Airing on ITV1, The X Factor has been the No 1 show in the UK for eight years, with the 2010 finale achieving a peak of 21.2 million viewers, and a 65% share. The 2011 finale, held at Wembley Arena in front of a live audience of 12,000, was the most watched entertainment TV show of the year. The X Factor launched in the US in the fall of 2011 on Fox, immediately becoming the No 1 unscripted show of the season. The X Factor also gave Fox victory in the November sweep among adults aged 18 to 49 for only the second time in the network's history. The US version airs in 166 countries. Local versions of The X Factor are now produced in more than 41 territories and artists discovered by The X Factor format have sold more than 100 million records worldwide, including 110 No 1's, 270 Top 10 records, and 501 Top 50 releases.

Got Talent launched in the USA in 2006, as America's Got Talent. In the US, America's Got Talent has been the highest rated series on NBC for the last four seasons, reaching average audiences of up to 16.4 million viewers. The US version airs in 177 countries. Britain's Got Talent launched in the UK in 2007, and was the nation's highest-rated new entertainment programme of the year. The 2012 series final which saw Ashleigh Butler and Pudsey the dog triumph, had a peak audience of 14.5 million making it the highest rated UK entertainment television show to date this year. Local versions of the show have been produced in 54 territories so far, with the 2011 final of China's Got Talent delivering a record-breaking 60 million viewers.