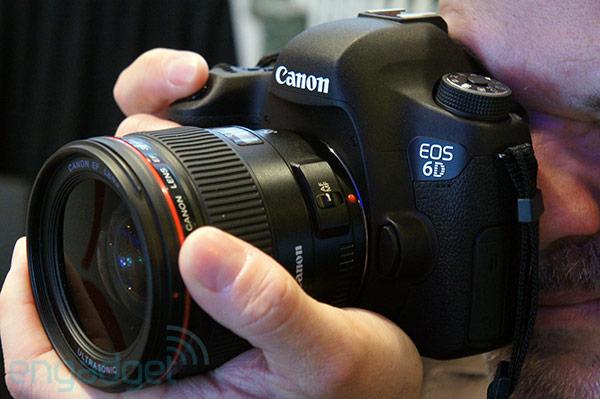 Nikon just announced its D600, a $2,100 DSLR with a full-frame sensor. Now, just four days later, we have a similar (and identically priced) offering from Canon. Coincidence? Not likely. Industry backchannel conspiracies aside, however, it's only to our advantage to have a choice -- if you're looking to upgrade your digital SLR without taking out a second mortgage, you can now pick Nikon's model, or the EOS 6D from Canon. The latter flavor, which offers built-in WiFi (the D600 requires an adapter), packs a 20.2-megapixel CMOS sensor, and it's 20 percent lighter than the 5D Mark III, which will remain on the market, targeting professional users. The camera features a sensitivity range of ISO 100 through 102,400, it can shoot 4.5 fps stills and offers 1080/30p video capture. It also has an optical viewfinder, paired with a 3.2-inch 1.04-million-dot LCD on the rear, which looks just as sharp as you might expect.

What really blew us away, though, is the new camera's size and weight. It's more compact than the 5D and even the 7D, an APS-C camera, weighing in at 690 grams -- a 20-percent decrease from that larger pro model. 20 percent may not sound like a tremendous improvement, but it's certainly noticeable, boosting the 6D's versatility, and making it an ideal choice for street and travel photography. We haven't had a chance to shoot with the new high-end DSLR just yet, but it felt quite solid in hand, despite the more compact design and significant weight drop. Take a closer look in our gallery below, followed by our hands-on video after the break.