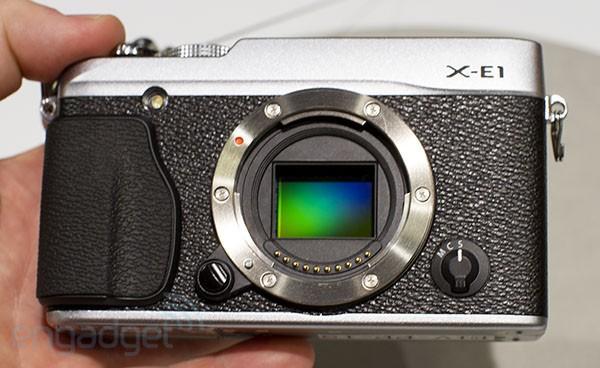 Sure the XF1's nice to look at, but the real star of Fujifilm's 2012 Photokina lineup has to be the X-E1. The X-Pro1's little sibling offers up most of the functionality of its bigger, pricier brother -- save for its inclusion just an electronic viewfinder -- into a body that's roughly a third smaller. That said, this is hardly a compact mirrorless -- the X-E1's still got a bit of girth and weight to it, compared to some of the smaller entries in the field. Still, it feels nice in the hand and isn't likely to weigh down your shooting -- particularly for those accustom to using a larger DSLR. It's also worth pointing out, right off the bat, that the retro-styled interchangeable lens camera is significantly cheaper, running you $700 less than the X-Pro-1.

Flip the camera over and you get a 2.8-inch 460k-dot LCD. Just above the display is a devoted button that will pop up the retractable flash directly above. The X-E1 will be hitting stores in November, carrying a $1,000 price tag. Buy a kit with a lens and you'll still come in $300 under the X-Pro1's $1,700 price tag, making for a full-featured and great looking little mirrorless for a lot less money.