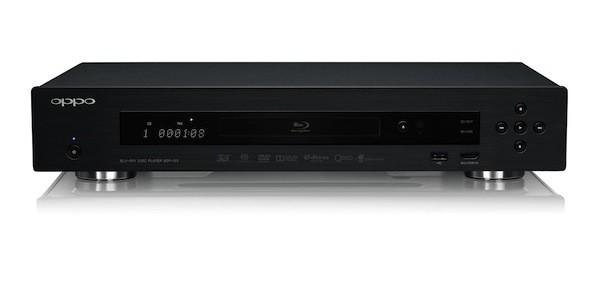 Regarded as the best of the best when it comes to disc players, Oppo has two new ones that can easily handle any disc you've got. Physical media isn't the only game in town, obviously, so in addition to Netflix, Vudu and local file support like MKV, Oppo has stepped it up even further by adding an HDMI port in front for use as an MHL input. This allows you to leverage the high-end Oppo's processing to do wonders on content stored on your portable or other MHL source. Speaking of video processing, both the new guys use Marvell's Qdeo video processor and are capable of doing both 2D-to-3D conversion as well as up-scaling to 4K. From a control perspective, a back-lit remote is included, but there's also an IR input, RS-232 and mobile phone apps. The BDP-103 will surely satisfy any videophile at $499 this October, but if you happen to be an audiophile too, then you'd probably want to wait until the BDP-105 is released later this year. Not only does it feature two ESS Sabre32 Reference DACs and a Toroidal linear power supply, but there are also dedicated stereo outputs with both RCA and XLR balanced connections and a headphone amplifier -- if you know what all that is, we're sure you really want it.

The BDP-103 and BDP-105 are premium universal Blu-ray DiscTM players that support Blu-ray, Blu-ray 3D, DVD-Video, DVD-Audio, Super Audio CD (SACD), HDCD, and CD formats. Additionally, the players feature three USB ports as well as wired and wireless networking to support popular video and audio file formats including AVCHD, MKV video, high-resolution WAV and FLAC music, and digital photos. The players provide access to popular entertainment network services including Netflix®, VUDU®, Film Fresh®, Pandora® and YouTube®, with more to come.
OPPO products are known for their excellent picture quality, and the BDP-103 and BDP- 105 continue in this tradition. Using a two-step video processing approach that utilizes a custom dual-core SoC and the latest generation of Marvell's Qdeo® video processor, the players deliver a stunning theatrical experience with true-to-life picture. Additional video processing features include 4K up-scaling, 2D-to-3D conversion, 1080p24Hz output, HDMI 1.4 with Deep Color, Source Direct output, and extensive picture control and enhancement options. Two HDMI outputs are provided, adding to the players' versatility by allowing one output to be used for video and the other for audio, and even enabling the player to drive two displays at the same time.

On the audio side, both players support all of the high-resolution audio formats with bit- stream output and onboard decoding of Dolby® TrueHD and DTS-HD® Master AudioTM. For SACD playback, users can choose between sending native DSD or converted PCM through the HDMI and analog outputs depending on their preference and equipment compatibility. The BDP-103 provides a configurable 7.1ch analog output that can be used in stereo, 5.1ch or 7.1ch mode. The BDP-105 adds audiophile-grade components including an analog output section sporting two ESS Sabre32 Reference DACs, a newly designed Toroidal linear power supply, dedicated stereo outputs with both RCA and XLR balanced connections, and a headphone amplifier connected directly to the DAC.

Last but not least, customers have always asked for ways to take further advantage of the excellent audio and video processing functions provided by the OPPO players, and the new players answer this request by adding two HDMI input ports, one on the front and one on the back, with the front HDMI input doubling as a Mobile High-definition Link (MHL®) input. Users can connect external devices such as set-top boxes, network streaming devices, and even mobile phones to take advantage of the players' video processing power. The BDP-105 takes this a step further by adding an asynchronous USB

DAC input that supports the USB Audio 2.0 standard, along with additional coaxial and optical digital inputs. Users can stream bit-perfect audio from their computer to the BDP- 105 without worrying about the jitter performance of their computer's master clock thanks to the USB DAC's asynchronous clock mode.

The BDP-103 and BDP-105 are designed for user convenience and installation flexibility. Beyond the included back-lit remote control, the players can be controlled via its IR IN, RS-232 control ports, and mobile phone control apps. Users will appreciate the quick startup and fast disc loading performance of these players. Accented with a heavy gauge brushed aluminum front panel, dimmable display and a sturdy chassis, the players fit well with any home theater environment or sound system.

The suggested retail prices are $499 for the BDP-103 and $1199 for the BDP-105. Although the exact launch date has not yet been set, OPPO expects to release the BDP- 103 in October and the BDP-105 by the end of 2012. The players can be ordered directly from the OPPO Digital web site http://www.oppodigital.com or purchased through authorized resellers.

In this article: 3D, 4k, audiophile, BDP-103, BDP-105, Blu-ray, blu-ray player, Blu-rayPlayer, HDMI, hdpostcross, MHL, Netflix, Oppo, player, Qdeo, RS-232, SACD, Videophile, Vudu
All products recommended by Engadget are selected by our editorial team, independent of our parent company. Some of our stories include affiliate links. If you buy something through one of these links, we may earn an affiliate commission.
Share
Tweet
Share