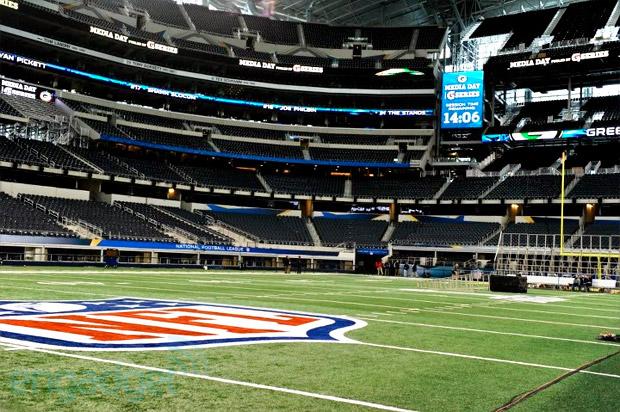 You don't have to look high (or low) to find a litany of complaints regarding Time Warner Cable's service, support or pricing, but it's evidently aiming to right one particular wrong later today. According to Bloomberg, the National Football League has inked a deal with TWC to bring the NFL Network and RedZone Channel to its systems. The move comes just months after the NFL ushered its networks onto rival Cablevision, putting TWC is a particular bind in the greater NYC market. It's still unclear where the channels will be positioned and how much extra you'll have to pony up to get 'em, but hey -- it's cheaper than moving to a FiOS neighborhood. (Though, admittedly, less satisfying.)

Update: Both parties have confirmed it, NFL Network and NFL RedZone Channel are coming to Time Warner Cable and Bright House Networks starting September 23rd. NFL Network will be included for customers on the Digital Basic and Sports Pass tiers, while NFL RedZone is on the Sports Pass package only, check the press release after the break for the relevant details and self-congratulatory affirmations.

NFL Network and NFL RedZone will debut in Time Warner Cable and Bright House Networks homes beginning this Sunday September 23, with full launch before Thursday, September 27.
"We're delighted to have reached an agreement for NFL Network and NFL RedZone that provides a good value to our customers," said Melinda Witmer, Executive Vice President and Chief Video and Content Officer for Time Warner Cable. "The additional games this year and the proven appeal of NFL RedZone will certainly prove to be a draw for our customers. We look forward to a long and productive relationship with the NFL."

"We thank our customers for their patience while a fair deal was reached for all involved," said Steve Miron, CEO, Bright House Networks. "It is especially rewarding to say yes to our customers who have requested NFL Network's award-winning coverage."

NFL Network is the home of Thursday Night Football - 13 primetime NFL regular season games from September through December - and is the destination for all that happens around the sport of football. NFL Network airs seven days a week, 24 hours a day, 365 days a year and provides viewers with more than 2,500 hours per year of original programming, including: NFL Total Access, NFL GameDay, the new four-hour NFL AM weekday morning show, Top 10, Playbook, NFL Replay, NFL Classic Games plus the Emmy award-winning Sound FX and America's Game.
NFL Network also features every NFL preseason game, the Senior Bowl, plus more coverage of the NFL Draft, Pro Football Hall of Fame ceremony, NFL Scouting Combine and Super Bowl than anyone else.

The extraordinarily popular NFL RedZone, produced by NFL Network, whips around every NFL game on Sunday afternoons, delivering the touchdowns and most exciting moments as they happen and in high definition. When a team goes inside the 20-yard line, fans see the crucial plays live. The channel keeps fans up-to-date in real time, switching from game to game with live look-ins, highlights and a chance to see every important play. For more information on NFL RedZone, visit www.nfl.com/redzonetv.

In this article: bhn, Bright House Networks, BrightHouseNetworks, carriage, deal, football, hdpostcross, hdpostmini, minipost, nfl, NFL Network, NflNetwork, pay-tv, RedZone Channel, RedzoneChannel, sporting, sports, television, time warner cable, TimeWarnerCable, tv, twc
All products recommended by Engadget are selected by our editorial team, independent of our parent company. Some of our stories include affiliate links. If you buy something through one of these links, we may earn an affiliate commission.
Share
Tweet
Share