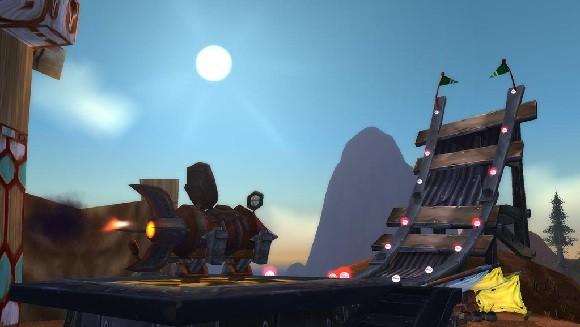 This Monday, WoW fans will line up at stores around the world to buy the game's fourth expansion, Mists of Pandaria. For Blizzard, the past eight years have been an incredible run, setting records for sales and building one of the largest virtual communities on Earth.

Let's look back at the game's original launch, when Blizzard wasn't quite as prepared as they are today for the game's overwhelming popularity.

Blizzard's chief operating officer Paul Sams couldn't wrap his head around what he was seeing. Just after 11 p.m. on November 22, 2004, he was sitting in deadlock traffic on a freeway offramp in Fountain Valley, California. He looked over at the Fry's Electronics outlet not far from the road. The store had been surrounded by some sort of dark, seething mass.

Caught in traffic, Sams was in danger of missing the game's launch event at Fry's. Rather than fight his way through the jumble of cars, he decided to park some distance away. It was still unclear to him what was happening. The electronics store was only minutes from Blizzard's headquarters in Irvine. He thought he had left the office with plenty of time to spare. He never imagined that getting to the store would be difficult this late at night.

Now, he found himself walking under the moon past a snarl of traffic that pointed straight at the Fry's. As he closed in on the store, he realized that the seething mass he had seen from the freeway was a crowd of people. They were all waiting in line to buy an autographed copy of Blizzard's latest creation: World of Warcraft.

"The line [was] looped around the building," Sams later told The New York Times in a February 2005 interview, "and then looped around the parking lot. It was like a football tailgate, with the R.V.'s and barbecues in the lot and everything." Local radio station KROQ blasted rock music from a temporary pavilion. A fan with a laptop played Warcraft III on an overturned shopping cart as an audience rooted him on. Chicken filets sizzled on hibachis. Police cars cruised the lot. This wasn't just a launch-event line. This was a party -- a very big party.

Years earlier, the launch event for Warcraft III at the same Fry's had brought around 700 people. For the current launch, Blizzard's producers provided the store with 2500 copies of the game, including 1000 collector's editions. Even this hopeful number proved woefully insufficient. According to Escapist Magazine, nearly 7000 people were in line that day -- ten times the number who had shown up for Warcraft III. (Estimates vary. The Times says 5000.)

Players had come from as far away as Las Vegas, more than four hours away, to meet the developers and get their hands on a copy one day earlier than elsewhere. Faced with an overwhelming turnout, Blizzard staff had to return to the office to scrounge for every additional copy they could find. For employees like Sams, as they witnessed the still-forming line close to midnight, the reality of the situation was beginning to sink in. "The happiness became terror on the first day," Sams said.

The crowd began to gather around noon, twelve hours prior to the event. The first people in line were Matt and Dylan Hall, two teenagers from Irvine. Even though they'd be waiting a full turn of the clock to get their hands on the software, both were planning to take the game home and begin playing it immediately. Matt had attended the Warcraft III event at Fry's, but he had been near the end of that line, so he wanted to get there early this time. He was hoping to be closer to the front. Needless to say, he got his wish.

Not everyone was so lucky. Gamespy's Tom Chick arrived late after suffering a flat tire and stopping for an emergency fuel-up. "[W]e arrived at a quarter to midnight," he wrote, "which put us near the end of a line that circled Fry's twice. Twice. Do you know how big Fry's is? Maybe you don't. It's big. Wal-Mart big. You could park a pair of 747s inside a Fry's Electronics. And the second circle of the line didn't even have the luxury of hugging the building. It swung wide around the outside of the parking lot, as lonely and remote as the orbit of Pluto."

A Valhalla of nerddom

Gamespy's editors called this particular Fry's a "Valhalla of nerddom." The store is enormous in scope. From the outside, it resembles a monolithic warehouse, with giant signs glowing red from the edges of one corner. Aside from the jaunty red awning over the main entrance, it's what the headquarters of an evil corporation might look like in an 80's sci-fi film. The entryway, with its rounded stone ceiling and electric "torch" chandeliers, evokes a low-budget version of ancient Rome. The enormous shopping area is packed with geek-friendly merchandise. The tall shelves resemble a Home Depot more than a typical Best Buy.

On this night, the store had been radically altered to accommodate the event. A red line on the floor weaved among rows of oversized Warcraft game boxes to guide anxious customers to the cashiers. Then a blue line guided them to rows of black-clothed tables, where more than 50 Blizzard employees had been seated. They represented all areas of the development team, waiting to meet far more people than they had dared to imagine.

At midnight, the crowd flooded inside, ushered in by a Fry's employee in a tauren costume. Customers filled the red-line layout to capacity and then extended far, far out of the door. As the night wore on, the dev team signed (and signed, and signed) anything the fans brought: game boxes, books, posters, T-shirts, jackets, even the tablecloths provided for the event, along with at least one folding chair. One Blizzard employee said, "I guess if you're going to have a massively multiplayer game, it's a good thing when you have this many people show up."

The event finally ended around 5 a.m.

The people at Fry's weren't the only ones eagerly anticipating the release of the game. By midnight of the next day, almost a quarter million units had been sold in North America, Australia, and New Zealand, the first markets where the game was available. To that point, it was the most first-day sales of any PC game in history. Each expansion, culminating in Cataclysm, has broken that record. In spring 2012, Diablo III bested Cataclysm's numbers with 3.5 million units sold in the first 24 hours.