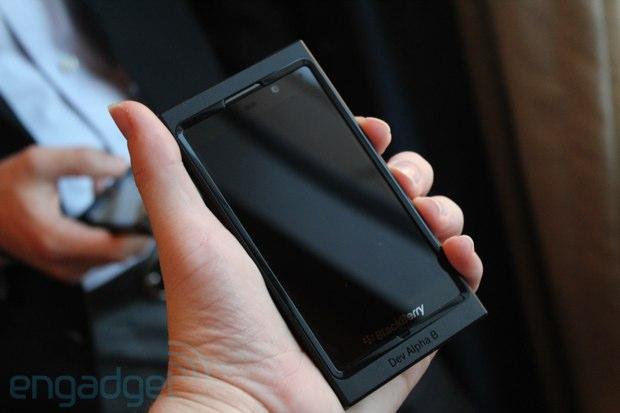 BlackBerry's Dev Alpha handset proved to be quite the popular item when it was revealed earlier this year. It was so popular, in fact, that the company ran through the 5,000 it constructed in short order. So, it had to build a whole new batch of developer handsets to meet the demand, and thus was the Dev Alpha B born. We got our mitts on this new bit of kit and had a chance to see how it handled RIM's latest incarnation of BB10, so join us after the break for our impressions. Like its elder, the original Dev Alpha, the B has a top notch 1280x768 display on its front with good color saturation and viewing angles, but that screen is where the similarities stop. While the Dev Alpha borrowed heavily from the PlayBook's design, ahem, playbook, the B looks unlike any other BlackBerry. Its body is constructed entirely of plastic, save the aluminum power button up top and volume rocker on the side, plus the sliver of metal serving as the earpiece grill. There's a 3.5mm headphone jack up top, plus mini-HDMI and microUSB ports on the edge opposite the volume controls. While it isn't as solidly constructed as its predecessor -- seams where body panels met weren't uniform, and the power button had shallower travel than we'd like -- the B still strikes us as a sturdy device, and, of course, it's not built for consumer consumption anyway.

As for the Dev Alpha B's performance? Swiping from the home screen through the app grid was smooth, and in fact, all the graphical transitions we saw -- from the unlock screen to opening various apps -- were quite fluid as well. Granted, we only spent a few minutes with the device, but we never saw the hardware break a sweat, and we rather enjoyed our brief interaction with the fuller version of BB10 it was running. In particular, we were enamored with the BlackBerry hub, which is essentially an inbox that aggregates all your notifications in one pane. And, given our tendency to check Twitter and email throughout the day, we really appreciated the fact that users can easily and unobtrusively peek at those notifications using a right angle gesture. We're hoping to spend some more time with both BB10 and the Dev Alpha B while we're here at BlackBerry Jam Americas, so stay tuned for more.