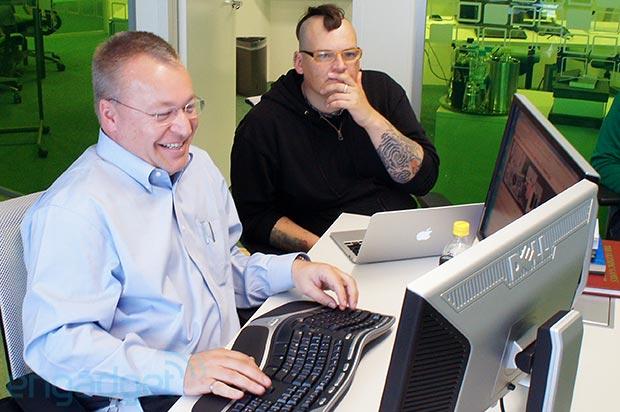 Do you know what's better than one interview with Stephen Elop? Two interviews in one month. We'd barely recovered from yesterday's bout of nostalgia when we were given the opportunity to sit down with Nokia's CEO in his office at the company's HQ. Better yet, we were allowed to record the discussion with a hand-held Lumia 920 prototype. The resulting video is remarkably stable. Full disclosure: the audio was recorded with a shotgun mic mounted on a Sony NEX-C3 camera.

We talked about HTC's colorful "signature" Windows Phone 8X and 8S and what that means for the Nokia-Microsoft partnership. Next we asked if Nokia is planning to work with carriers to offer incentives for existing Lumia owners to upgrade to the company's 920 and 820 handsets. Finally, we discussed the evolution of PureView imaging technology from the 808 to the 920 and how Nokia plans to combine these building blocks in the future. Hit the break for our video interview.

Want to know even more? Check out the liveblog of this morning's "ask me anything" Q&A with Stephen Elop where he was kind enough to answer your questions – topics ranging from Nokia's backup plan, the company's take on Windows tablets and the launch of the Asha 308 and 309.

Zach Honig contributed to this report