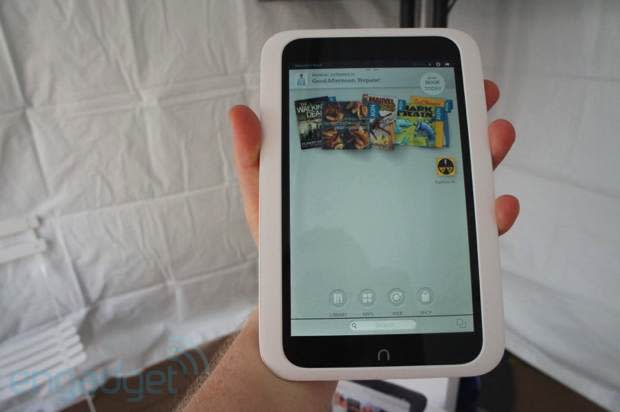 It was roughly this time last year that Amazon's Kindle Fire showed us just how successful an aggressively priced 7-inch tablet could be, becoming, arguably the go-to gift of the last holiday season. This summer, Google upped the ante, showing the world that a $200 tablet could be more than just an OEM-ed content delivery device, enlisting ASUS to design a really solid piece of hardware at a seemingly impossible price.

Barnes & Noble's journey in the space, meanwhile, has been decidedly more convoluted. In mid-October of 2010, the company gave the world the Nook Color -- a product with a wildly original industrial design, but decidedly limited functionality, which was, for most intents and purposes, an LCD-based color e-reader. Halfway through the following year, the device got a Pinocchio-like upgrade, transforming it into an honest-to-goodness tablet, apps and all. The device's celebration was cut short, however, eclipsed entirely by the arrival of the aesthetically (nearly) identical, but internally superior Nook Tablet.

When Amazon announced the release of the Kindle Fire HD and all of its many variants, there was little question that Barnes & Noble had something waiting in the wings as well. After all, much of the bookseller's hardware game plan seems to revolve around going toe-to-toe against Amazon offerings, and since the company beat its chief competition to the market with a glowing reader, a Nook Tablet seemed all but inevitable. With this week's announcements, however, the company has managed to offer up some surprises -- for starters, there's the fact that it's doubled its efforts with the release of two tablets -- with the 7-inch Nook HD and the 9-inch Nook HD+. Then there's the fact that the company has clearly put great effort into the hardware this go-round, rather than offering up yet another rehash of the Color / Tablet lineage. Let's start with the Nook HD, shall we? Join us after the break. From an aesthetic perspective, the HD+ can be regarded as a spiritual successor to its Nook tablet forefathers. The HD, on the other hand, wipes that slate clean, instead sharing a good deal more with the company's reader offerings. It's a stubby little thing with well-rounded corners and a clearly defined bezel around the 7-inch display. Flip it over, and you'll find a back that also shares a lot with its E Ink brethren, with a soft-touch feel that's carved out to help you grip the thing. And really, if there's a common thread across Barnes & Noble's hardware choices here, it's that the company was focused on, above all, a product that's easy to hold.

The weight certainly helps when it comes to a product meant to be held for long reading marathons. B&N's managed to get the HD down to a solid fighting weight at 319 grams, which compares quite favorably to the Nexus 7 (340 grams) and the Kindle Fire HD (395 grams). The light weight comes thanks, in part, to the fact that the company didn't beef up the battery, instead offering up some software bumps it says compensate for the additional battery drain that comes with things like a revved-up display. The company's also quick to point out that its product's bezels are just a built-in necessity -- they give you a place to stick those thumbs when you're reading. It's a natural positioning once you've got your fingers firmly positioned in the crook on the back of the device (of course there are no physical page turn buttons here, unlike the Nook Simple Touch). The plastic bezels also reduce the incidence of fingerprint art. The skinny form factor also makes it possible to wrap your fingers around the body of the tablet, if you prefer reading that way.

The company's managed to add the big bezels to the proceedings without detracting too much from the overall look of the device -- if anything, it offers up a distinction (though, of course, not so pronounced as that of its big brother) from a slew of lookalike slates. Between the plastic and the display is a flush black bezel that gets a bit thicker on the top and the bottom, housing the trademark "n" home button -- a signature, the company explains, that helps people orient the device even when the screen is off. The top, on the other hand, is a whole lot of empty space -- there's no camera here or on the rear, a "tradeoff," according to company reps, but one they're confident won't distract from the devices greater mission: reading.

In spite of that focus on reading, the company's opted for what it's deemed the "highest resolution on a 7-inch tablet," and certainly the 1,440 x 900, 243ppi display looks quite nice when you're watching one of those hi-res movies from the newly announced Nook Video. The graphics on the UI, however, aren't quite finalized and looked a bit choppy at times as we were scrolling through, something the company has promised to fix before launch. The same goes with the performance on this 1.3GHz OMAP 4470-packing device, so we'll have to hold off judgment until we get our hands on a final unit -- which shouldn't be long...

The HD is running a customized UI on top of Ice Cream Sandwich. The theme here is "Paper," which, naturally, translates to simplicity. There's really not a lot going on when you load up the homepage, "focusing on the content itself," according to B&N. You've got a scroll wheel of fanned-out content on top and an open desktop onto which you can drop stuff for easy access. On the top is the "Your Nook Today" button, which brings you to a page featuring the current weather conditions and recommendations based on your recent activity. Along the bottom are buttons for Library, Apps, Web, Email and the newly-redesigned shop.

The Nook HD is up for pre-order now. It'll start shipping in late October and will hit Barnes & Noble stores early the following month. It's available in "Snow" and "Smoke" colors and 8GB and 16GB varieties (both expandable via microSD slots), which are priced at a nice $199 and $229, respectively.

In this article: android, Barnes Noble, barnes and noble, BarnesAndNoble, BarnesNoble, hands-on, ice cream sandwich, IceCreamSandwich, nook, nook hd, nook hd plus, Nook HD+, nook video, NookHd, NookHd+, NookHdPlus, NookVideo, video
All products recommended by Engadget are selected by our editorial team, independent of our parent company. Some of our stories include affiliate links. If you buy something through one of these links, we may earn an affiliate commission.
Share
Tweet
Share