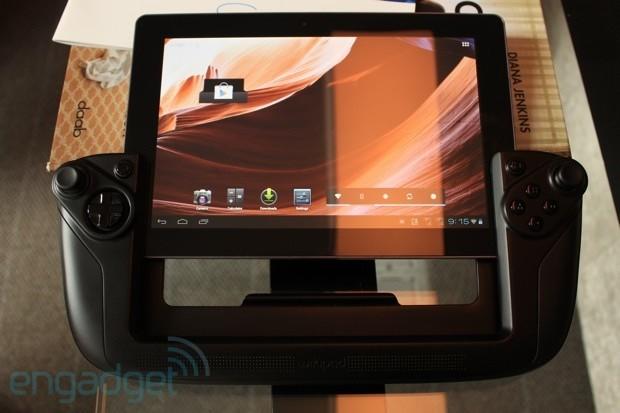 The Wikipad is an anomaly. It's a 10.1-inch, $500 Android tablet aimed squarely at gamers -- an expensive portal to a platform many mobile game developers have abandoned due to piracy. It's got an IPS display with 1,280 x 800 resolution, an NVIDIA Tegra 3 T30 quad-core 1.4GHz processor, 1GB of DDR2 RAM, and Android 4.1 Jelly Bean (at launch). So ... it's not quite as sharp in the graphics department as some other tablets on the market, nor is it as pretty as its main handheld gaming competition, the PlayStation Vita. On top of that, it's from an engineering firm that you've never heard of -- Wikipad is also the name of the business behind the tablet, and this is the company's first product launch. Oh, and did we mention that the main selling point is an attachable game controller that frames half the tablet in a mess of plastic buttons, joysticks, and speakers? And no, the controller won't be sold separately, nor will it work with any other tablet.

Defying all logic, however, the Wikipad feels like a surprisingly solid piece of equipment (regardless of the fact that the prototype model we used was hand-built). From the light but solid construction of the tablet's chassis, to its grippy molded rear -- which helps both for gripping the tablet without the controller attached and assists sound amplification when the device is laid down -- nothing about the device feels cheap. As a tablet, it's speedy and responsive. Apps load quickly and smoothly, and it's got extra loud speakers for gaming without headphones (or for David Guetta, as was demonstrated to us). The custom skin it was running felt a bit rough -- the apps get reorganized with a gaming focus and slapped onto a flippable cube, which caused some visual stuttering from pane to pane. Another feature of the custom OS is a special 3D game launcher, which includes sections for Nvidia's Tegra Zone, PlayStation Mobile games, GameStop-suggested titles, and Google Play. There are some less than exciting ad banners attached to this launcher, but they're easily ignorable. Though Gaikai is still working with the Wikipad post-Sony buyout, CEO James Bower told us the game streaming service won't be there at launch -- he's hoping it'll arrive by year's end, "but that's up to Sony."

With the tablet's dual analog stick controller attachment, it's a perfectly capable gaming device. We saw it transform the touch-based mess of Grand Theft Auto 3 for Android into a playable version of the Rockstar Games classic, with no button mapping required. Magic! It works with existing Android games as well, as evidenced by time we spent with zombie shooter Dead Trigger. Is the controller perfect? Not by a longshot -- the buttons and the joysticks feel somewhat cheap comparatively with an Xbox 360, PlayStation 3, or Vita. Is it a massive step up from touch-based controls? For sure! But does it compare with the PlayStation Vita? Not quite. The larger screen is nice, but the Vita's OLED 5-incher is a beauty -- and stands in stark contrast to the Wikipad. And the build of the controller -- from sticky buttons to loose analog sticks -- doesn't stand up to the Vita nor the 3DSes clicky buttons and precise analog sticks.

It's not quite clear who the Wikipad is made for. The company's slogan is, "Work Hard, Game Hard," which Bower tells us is intended to straddle the line between enterprise and gamers. But straddling that line could be tough, with both camps potentially ignoring the Wikipad for lack of focus. And are gamers willing to pony up $500 for yet another handheld gaming console -- both Sony's Vita and Nintendo's 3DS are already competing for that attention -- especially when new consoles are expected as early as next year? And that's to say nothing of Vita's lackluster sales, dwarfed by less expensive competition from Nintendo's 3DS.

It may not matter -- Bower says pre-orders are already projecting a profitable launch for the Wikipad. It goes on sale October 31 for $500, with GameStop exclusively handling pre-sales. No carriers are providing the Wikipad with 3G or 4G service at launch, though it's capable of handling both; the company's hoping to have more info on carriers by the end of 2012.
In this article: android, gaikai, gamestop, google, google play, GooglePlay, hands on, HandsOn, james bower, JamesBower, jelly bean, JellyBean, jim bower, JimBower, mobilepostcross, nvidia, nvidia tegra 3, NvidiaTegra3, sony mobile, SonyMobile, tegra, tegra zone, TegraZone, video, wikipad
All products recommended by Engadget are selected by our editorial team, independent of our parent company. Some of our stories include affiliate links. If you buy something through one of these links, we may earn an affiliate commission.
Share
Tweet
Share