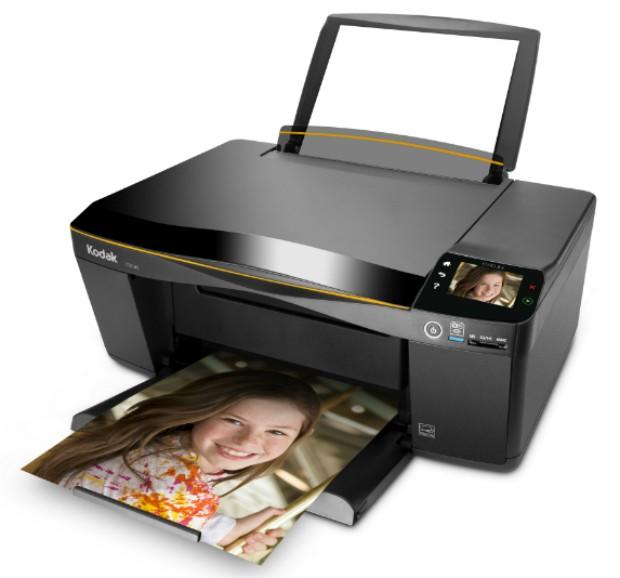 More gloomy news from Kodak: the company just announced that it will stop selling consumer inkjet printers in 2013 and instead focus its efforts on commercial printing products. This decision hardly comes as a surprise: Kodak filed for Chapter 11 bankruptcy earlier this year and attempted to auction off a stockpile of patents valued at up to $2.6 billion. The company stated on Friday that it expects to take a $90 million hit due to its floundering inkjet business. Kodak's garage sale attracted interest from unlikely alliances in the form of Apple and Microsoft versus Google and Samsung, but reportedly only reeled in disappointing offers under the $500 million mark. Hoping to rebound next year as a "lean," mean, successful machine, we'll just have to wait and see what develops for this fallen photography frontrunner.

ROCHESTER, N.Y., September 28 --
Eastman Kodak Company will highlight its restructuring accomplishments to date in a motion it plans to submit today to the Bankruptcy Court to extend until February 28, 2013, its exclusive right to file a plan of reorganization. The extension will assist the company as it continues its progress toward successful emergence in the first half of 2013.

In its motion, Kodak describes the substantial progress it has made toward reorganization goals since filing for Chapter 11 on January 19, 2012. Kodak's case is large and complex, involving some $5 billion in assets, global operations, thousands of contracts and leases, thousands of potential creditors, and ongoing asset sales. Kodak's progress includes the successful stabilization of its business, the development of its emergence plan, significant operating improvements, the expansion of customer and vendor relationships, and substantial cost reductions.

Kodak previously announced its intention to emerge as a company focused on commercial, packaging & functional printing solutions and enterprise services, as well as processes to sell its Personalized Imaging and Document Imaging businesses. Consistent with that emergence strategy, Kodak has continued to manage its Consumer Inkjet business for profitability, and the company announced today that, starting in 2013, it will focus that business on the sale of ink to its installed base, and wind down sales of consumer inkjet printers. Kodak expects that this decision will significantly improve cash flow in the U.S. beginning in the first half of 2013.

"Kodak is making good progress toward emergence from Chapter 11, taking significant actions to reorganize our core ongoing businesses, reduce costs, sell assets, and streamline our organizational structure," said Antonio M. Perez, Kodak Chairman and Chief Executive Officer. "Steps such as the sale of Personalized Imaging and Document Imaging, and the Consumer Inkjet decision, will substantially advance the transformation of our business to focus on commercial, packaging & functional printing solutions and enterprise services. As we complete the other key objectives of our restructuring in the weeks ahead, we will be well positioned to emerge successfully in 2013."

Kodak remains committed to its significant installed base of consumer inkjet printer customers, who recognize the value proposition of affordable ink, high-quality output because of Kodak's unique pigment-based inks, and advanced features including cloud printing. The company will provide its customers and retail partners the same level of service and support they have come to expect from Kodak.

In its motion to the Court, Kodak described specific accomplishments thus far, including:

The formulation of a business strategy focused on commercial, packaging & functional printing solutions and enterprise services that will be the cornerstone of a plan of reorganization;
The stabilization of its global business resulting in the maintenance of key customer and supplier relationships around the world;
An extensive operational restructuring that has streamlined businesses and reduced corporate costs. This restructuring includes the reduction of Kodak's global workforce by more than 2,700 positions so far in 2012, with the current expectation of a further reduction of at least 1,200 employees (up 200 from the 1,000 previously announced). This 23% headcount reduction will result in a savings of more than $340 million per year and a smaller workforce of approximately 13,100 employees;
Negotiations with respect to a fair, equitable and permanent resolution of Kodak's U.S. retiree benefit (OPEB) liability, which amounts to approximately $1.2 billion;
Use of the applicable provisions of the Bankruptcy Code to renegotiate existing supply contracts or to enforce prepetition contracts to achieve substantial cost savings;
Actions to exit or sell unprofitable and declining businesses, such as the digital camera and on-line photo services businesses;
Commencement of a process to sell the market-leading Personalized Imaging and Document Imaging businesses, which are not core to Kodak's future. Kodak noted that, while the sale process is still in its early stages, there has already been significant interest among potential buyers for these businesses;
Continued negotiations with respect to the sale of its intellectual property assets and the development of alternatives in the event a transaction on acceptable terms is not reached, and
Continuation of normal global operations while aggressively conserving cash, with worldwide cash balances consistently in excess of $1 billion and with Days Payable Outstanding remaining stable.
The company anticipates that in the near term, it will begin realizing savings from its new, more strategically focused business, workforce reductions and other cost-reduction initiatives. Kodak continues its analysis of further operational and workforce reductions in an effort to streamline operations and generate profits.

"The actions we are taking are significant steps toward our successful emergence," said Perez. "We are committed to take the remaining steps required for our emergence in 2013 as a profitable, sustainable company."

An Omnibus Hearing to consider the motion and other matters is scheduled for October 17, 2012.