The one (gesture control) ring to rule them all 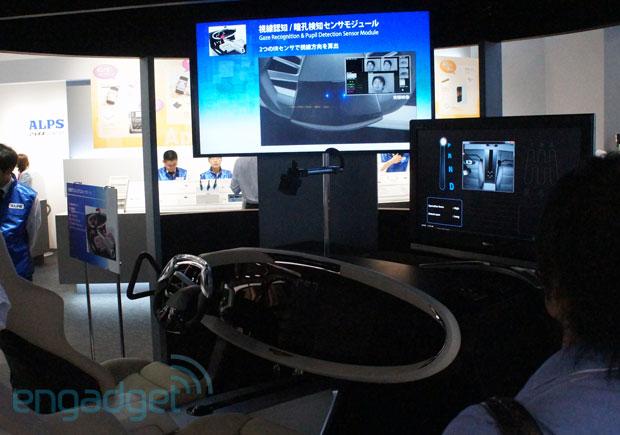 Residing in hall space a fair distance away from the likes of the Toyota and Sony, the automotive division of Alps Electric was demonstrating a forward-looking vehicle interface at CEATEC 2012. Connecting together the company's existing capacitive touch technology with motion sensors and eye movement cameras, the system centers on the multimodal commander -- that mysterious-looking orb located below the gear stick. Navigation through it can be done through waving your hand over the device, swiping or rotating the orb like a dial. This can then move through weather, music and map programs, which are all integrated into the car's touchscreen, while an overhanging motion sensor will also detect where your hand is headed. An Alps spokesman said that this means the system can try to predict your intentions, adjusting the UI before you reach for the controls. We've got a hands-on video from pretty busy showroom -- and more impressions -- after the break.

To demonstrate the overhanging motion sensor, a camera was positioned at the same point, visualizing a yellow box to show when the system detected movement toward the multimodal controller and a red box to show if hands were near the gearstick. Alongside a pair of capacitive handles, the steering wheel also housed its own eye detection sensors. These will monitor the driver's pupil dilation and, in its current iteration, offers to switch driving control from automatic to manual, if it deems that the driver is "excited." The gearstick, which remained hidden until the interface started, rose up just above the multimodal controller, and has its own system then gave assistance shifting gears, with only a light touch needed to change them. At the moment, the setup was still pretty rough around the edges, with an Alps employee keying in at least some of the commands during our demo, but we like the idea of integrating sensors that focus on the driver -- and that gently self-guiding gearstick. In this article: Alps, Alps Electric, AlpsElectric, car, CEATEC, CEATEC 2012, Ceatec2012, eye detection, EyeDetection, gesture, hands-on, japan, motion detection, motion sensor, MotionDetection, MotionSensor, prototype, vehicle, vehicle interface, VehicleInterface, vehicles, video
All products recommended by Engadget are selected by our editorial team, independent of our parent company. Some of our stories include affiliate links. If you buy something through one of these links, we may earn an affiliate commission.
Share
Tweet
Share