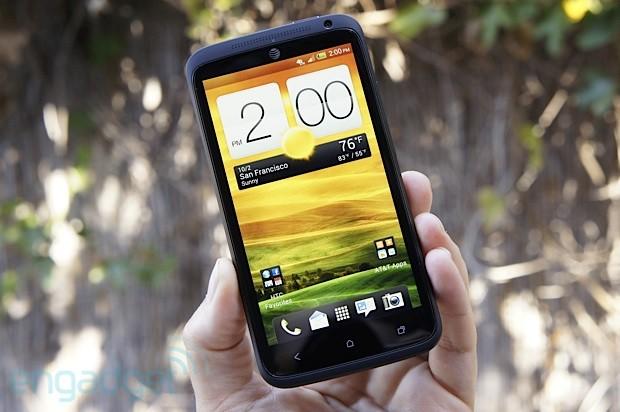 What do you do if you've been selling what's arguably the best superphone on the US market and the competition is heating up? Make it better, of course, and that's exactly what HTC's done with the One X+ for AT&T. This is the same improved handset we recently played with in the UK, but unlike AT&T's One X -- which dropped the global model's quad-core Tegra 3 with 32GB of storage in favor of a dual-core Snapdragon S4 with only 16GB of flash for the sake of LTE -- AT&T's One X+ gives you the best of both worlds: NVIDIA's 1.7GHz quad-core Tegra 3 AP37 SoC combined with Qualcomm's MDM9215m GSM/EDGE/UMTS/HSPA+/LTE radio plus 32 or 64GB of built-in storage.

Gone are the white and grey hues -- you can have your One X+ any color you want as long as it's flat black. Whereas the UK version of HTC's new flagship incorporates red accents around the camera and in the Beats logo, the US model is completely black. The rest of the specs match the global version -- you'll find the same gorgeous 4.7-inch 720p Super LCD 2 display with Gorilla Glass 2, same impressive eight megapixel f/2.0 autofocus BSI rear camera with flash, same 1GB of DDR2 RAM, along with the updated 2100mAh sealed battery and 1.6MP BSI front-facing shooter capable of 720p video. Jelly Bean and Sense 4+ are on the menu as well, with snappier-than-ever performance.

Put AT&T's One X and One X+ side-by-side, and other than the color difference you'd be hard-pressed to tell them apart. The carrier's logo is slightly different, but that's about it -- even the docking pins in the back line up perfectly. Other improvements common with the global model include Amplified Sound for clearer sound from the speaker, Sightseeing mode which lets the power button launch the camera and Auto Portrait mode which helps you take better self-portraits. There's still no word on pricing or availability but we invite you to feast your eyes on the gallery below and hit the break for our hands-on video.