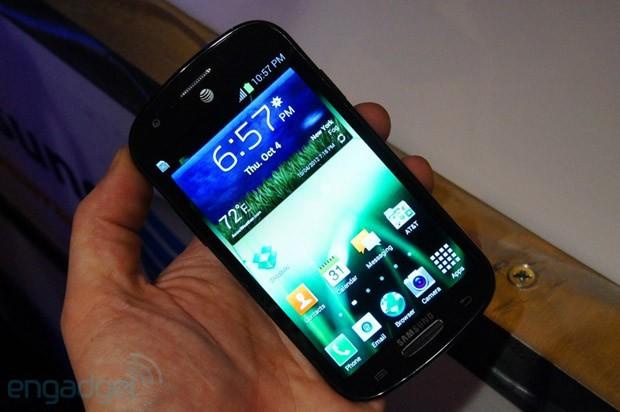 Samsung's Galaxy Express got a bit of a short shrift last month, revealed alongside a slew of other Samsung AT&T 4G LTE phones and not getting its own day in the sun. Here we are at AT&T's New York City event, providing that sun (albeit on a rainy evening). The 4.5-inch Super AMOLED Plus screen looks great, even running the aging Ice Cream Sandwich version of Android, and the 1.5 GHz dual-core processor is no slouch at speedily navigating the OS. The rear and front cameras leave a bit to be desired, with just 5-megapixels out back and 1.3 up front, but let's be honest -- you're not exactly looking for a top of the line camera in a Galaxy Express, are you? It'll be launching later this year on AT&T, though pricing and an exact release date have yet to be confirmed. Follow us past the break for a quick video of the device, won't you?

14
In this article: att, galaxy express, GalaxyExpress, hands-on, samsung, samsung galaxy express, SamsungGalaxyExpress
All products recommended by Engadget are selected by our editorial team, independent of our parent company. Some of our stories include affiliate links. If you buy something through one of these links, we may earn an affiliate commission.
Share
Tweet
Share