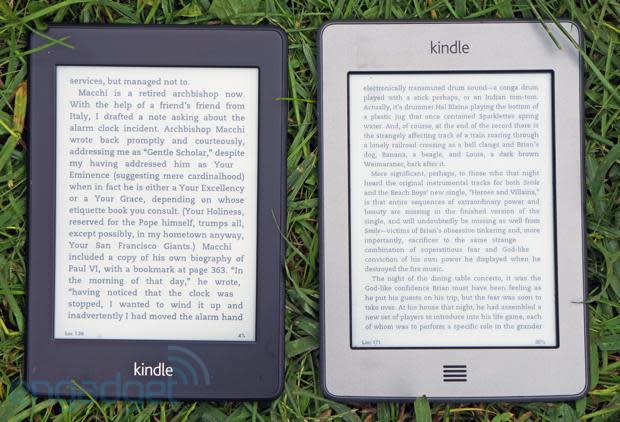 Amazon's Kindle Owners' Lending Library has grown considerably since launching in the US, and it looks like the company's finally decided it was time to let some other countries in on the service as well. It announced today that Amazon Prime members in the UK, Germany and France would all have access to the service "later this month," although it's not providing a specific date just yet. As in the US, it will let folks borrow up to one book a month for free, with over 200,000 titles available to choose from (including "thousands" in the countries' local languages). Alongside that expansion, Amazon has also announced yet another increase (of $100,000) to its Kindle Direct Publishing Select fund -- which pays independent authors who include their books in the Lending Library -- with an even bigger one planed for November. No word yet on any additional countries next in line.

Independent authors enrolled in KDP Select can reach more readers in Europe through the lending libraries, and earn money every time their book is borrowed

SEATTLE-October 11, 2012-(NASDAQ:AMZN)-Amazon.com, Inc. today announced that the Kindle Owners' Lending Library is coming to the UK, Germany and France later this month, bringing Kindle owners with a Prime membership over 200,000 books to borrow for free as frequently as a book a month, with no due dates. Independent authors and publishers using Kindle Direct Publishing (KDP) who enroll their books in KDP Select can be included in the Kindle Owners' Lending Library in the UK, Germany and France, as well as the US. With the new lending libraries launching this month, the KDP Select fund has been increased by $100,000 to $700,000 in October, with a larger increase anticipated in November. Authors will earn money every time their book is borrowed from any of the lending libraries – in September, authors earned $2.29 per borrow, which is more than many KDP books earn per sale.

"The Kindle Owners' Lending Library was launched less than a year ago in the US and customers are loving it," said Russ Grandinetti, Vice President of Kindle Content. "It's also been great for independent authors, who get to reach a whole new audience and make money in a new way, and now they'll be able to reach even more readers around the world. We're excited to bring the lending library to the UK, Germany and France."

Independent authors are experiencing increased sales by including their books in the US Kindle Owners' Lending Library through KDP Select, an option for authors to make money through the lending library and promote their book for free. In September, KDP Select books that enrolled in August earned 77% more royalties from paid sales than the three months before they were enrolled in the program. This figure is conservative and only includes books that were available via KDP for the entire three months prior to enrolling in KDP Select. To learn more about KDP Select, visit http://kdp.amazon.com/self-publishing/KDPSelect.

The Kindle Owners' Lending Library was launched in the US in November 2011 and offers access to a wide array of categories and genres in fiction and non-fiction. Soon Kindle owners with a Prime membership in the UK, Germany and France will also be able to choose from over 200,000 books to borrow for free – including thousands of local-language titles and all seven Harry Potter books in English, French, Italian, German and Spanish – as frequently as a book a month, with no due dates. No other e-reader or eBookstore offers such a service. To learn more about the Kindle Owners' Lending Library, visit:

In this article: amazon, amazon prime, AmazonPrime, e book, e books, e reader, e readers, e-book, e-books, e-reader, e-readers, ebook, ebooks, france, germany, kindle, Kindle Owners Lending Library, KindleOwnersLendingLibrary, lending library, LendingLibrary, prime, uk
All products recommended by Engadget are selected by our editorial team, independent of our parent company. Some of our stories include affiliate links. If you buy something through one of these links, we may earn an affiliate commission.
Share
Tweet
Share