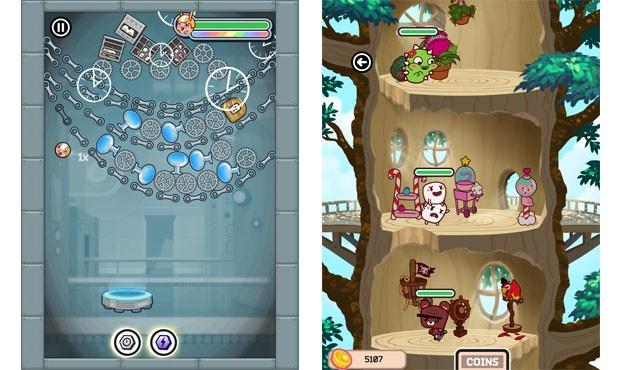 Atari may be little more than a vestige of its former self, but that isn't stopping the publisher from crafting new versions of its classic games. "Super Bunny Breakout," for example, is a project created with Ville-crafter Zynga, and it's a new spin on Atari classic Breakout. Not to be outdone, Zynga's added its own Zynga-esque flavor to the game, which means ... in-app purchases. Yes indeed, rather than a regular ol' ball bouncing around a stage, Super Bunny Breakout has players bouncing "a daredevil rabbit with an appetite for revenge -- sadly, that rabbit (and his friends) have seasonal affective disorder (or something) and can't help but lose energy. How to replenish that energy? You'll "collect or purchase coins via in-app purchase," apparently. Despite the stink of in-game purchases, Super Bunny Breakout costs $0.99 and is currently available on iPhone, iPad, and iPod Touch through iTunes.

Atari and Zynga Launch Super Bunny Breakout for iPhone, iPad & iPod touch
The Latest Addition to the Breakout Franchise from Atari Launches under the Zynga Partners for Mobile Program

In Super Bunny Breakout, players control Rodney - a daredevil rabbit with an appetite for revenge – launching him from a laboratory platform as he bounces around to destroy different structures and cages. Players can either collect or purchase coins via in-app purchase to feed critters and restore energy. Coins can also be used to purchase additional power-ups, food and cosmetic goods.

Super Bunny Breakout features include:
Infiltrate E.A.T. Labs in order to break the cages and free all your imprisoned buddies.
Unlock five handsome playable characters each with their own special super attacks.
Unleash unique power-up abilities for each Super Critter including Time Warp, Anti-Gravity abilities and more!
Play through 40+ physics-based levels to challenge your brick-breaking, critter-rescuing abilities.
Show your friends who's the bunny boss with Game Center integration for score leaderboards and achievements.

"Atari is a legendary innovator of video gaming and we are proud to partner with a company that has such a strong legacy in the industry," said Ben Jones, Vice President of Mobile Publishing at Zynga. "Zynga is committed to partnering with companies that produce high-quality titles to bring more games in more genres to its global network of players."

"Super Bunny Breakout is a fresh take on the iconic Breakout franchise, adding all new features, game play and a humorous cast of characters," said Jim Wilson CEO of Atari. "Our partnership with Zynga provides a platform to create visibility for the game and the Atari brand overall."

The Zynga Partners for Mobile Program is designed to help third-party partners of all sizes launch, promote, scale and grow their games and business.

The game was developed by Brooklyn based Curious Brain, the talent behind popular character-driven games based upon the Power Rangers, Angelina Ballerina and Paul Frank franchises.

About Atari, SA
Atari (www.atari.com) is a multi-platform, global interactive entertainment and licensing company. The original innovator of video gaming, founded in 1972, Atari owns and/or manages a portfolio of more than 200 games and franchises, including world renowned brands like Asteroids®, Centipede®, Missile Command®, Pong®, Test Drive®, Backyard Sports®, and Rollercoaster Tycoon®. Atari capitalizes on these powerful properties by delivering compelling games online (i.e. browser, Facebook® and digital download), on smartphones and tablets and other connected devices. The Company also develops and distributes interactive entertainment for video game consoles from Microsoft, Nintendo and Sony. As a licensor, Atari extends its brand and franchises into other media, merchandising and publishing categories.

For additional information, please follow us on Twitter.com/zynga. More information can also be found via the Zynga blog at http://www.zynga.com/about/blog.php.

Forward-Looking Statements
This release contains forward-looking statements relating to, among other things, the launch of Super Bunny Breakout and other games by third party developers on Zynga's platform, including through its Zynga Partners for Mobile program, and Zynga's future operational plans, prospects and opportunities to expand its business. The success of the matters covered by such forward-looking statements involves risks. Actual results could differ materially from those predicted or implied. Factors that could cause or contribute to such differences include, among other things, changes in player interests or the Facebook platform. More information about the risks Zynga faces is included in its quarterly and annual reports filed with the SEC, copies of which may be obtained at http://investor.zynga.com or the SEC's web site at www.sec.gov. Undue reliance should not be placed on the forward-looking statements in this release. Zynga assumes no obligation to update such statements.

In this article: apple, atari, av, breakout, ios, ipad, iphone, ipod touch, IpodTouch, itunes, mobilepostcross, super bunny breakout, SuperBunnyBreakout, timeline16vidreboot, zynga
All products recommended by Engadget are selected by our editorial team, independent of our parent company. Some of our stories include affiliate links. If you buy something through one of these links, we may earn an affiliate commission.
Share
Tweet
Share