Keyboards aren't always high on the list of considerations for folks buying a new computer or looking to upgrade an old one. Some may be more likely to splurge on a high-end monitor, or cram in as much RAM as possible. For this writer, though, the keyboard is one of the most important components of a computer, if not the most important. For the past 10 years or more, that's meant a split-design ergonomic keyboard in the vein of Microsoft's Natural Ergonomic Keyboard 4000 -- at least when not exclusively using a laptop. That style certainly takes some getting used to, and is always guaranteed to start a conversation, but it has some clear benefits for comfort (not to mention the well-being of your wrists) over the long term.

More recently, however, that old standby has given way to a mechanical keyboard with a traditional design -- the Matias Tactile Pro 3, specifically. A split-design mechanical keyboard would be ideal, but those are unfortunately quite a rare breed. While a something like the Natural Ergonomic Keyboard 4000 has advantages over your average keyboard in terms of overall comfort, it still feels like a regular keyboard. That is, it's slightly mushy and generally less tactile given its use of a rubber membrane for the keys instead of the individual switches found in a mechanical model like the Tactile Pro.

As anyone who's used both can attest, the difference is immediately noticeable. With a good mechanical keyboard, you don't have to worry about a key press not registering; the keys have more spring to them for a crisper feel and (here's the contentious part for some) they make more noise. It's not a typewriter-level racket, but there's a good chance you'll be frowned upon if you're sharing a desk with someone, or are trying to take notes while on a conference call. It's that potential issue that led Matias to try something different with its latest keyboard -- one that it claims is the world's quietest mechanical keyboard. Did it deliver? Read on to find out. 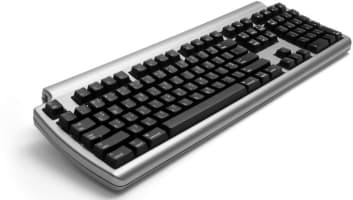 There aren't many surprises to be found with the outward appearance of the Quiet Pro. The Windows-specific model is all-black with a glossy finish, while the Mac version unsurprisingly sports a silver and black color scheme (and a matte finish) that keeps things in line with Apple's current status quo -- albeit with less of a premium feel in terms of construction. Matias has kept the overall design the same as the Tactile Pro in both cases, though: a look similar to Apple's old Pro keyboard with no frills beyond three USB 2.0 ports, only the basics in terms of extra keys, two legs underneath to prop it up and a 6-foot-long USB cable (no wireless option here). The PC model also adds a Tab key at the top of the numeric keypad to aid number crunchers.

The real selling point here, though, are the keys, and in that respect Matias has largely delivered. While it's still a bit louder than your run-of-the-mill membrane-based keyboard, the Quiet Pro is very quiet by mechanical keyboard standards. There is just enough of a sound to provide that assurance that each key is being hit, but if anyone nearby is bothered by you it's likely not the keyboard's fault.

The feel of the keys is a slightly more complicated matter. Matias says it spent more than two years working on a new type of key switch -- a modified ALPS switch it's dubbed Quiet Click -- and it has indeed come up with something unique. There's no mistaking the keys for those on a mushy membrane keyboard, but they aren't quite as firm or crisp-feeling as those a traditional mechanical keyboard like the Tactile Pro either. That's to be expected, of course, considering we're dealing with lots of plastic and moving parts, and the fact they feel as good as they do while also dampening the noise is quite an accomplishment. It's also worth pointing out that the keys themselves have beveled, or sculpted, keytops, another once-standard feature that's sadly becoming far less commonplace.

Indeed, the key switches are so unique that Matias is even planning to sell them to other companies and hobbyists interested in going the DIY route. The company tells us those will first be available in about a month in batches of 800 for $100, but it says it's also looking at selling packs of 200 in the $50-60 range. There's no word yet on any other companies planning to use them in their keyboards, but at least some have apparently expressed an interest.

$150 is a lot of money to spend on a keyboard, there's no question about that. If you do any serious amount of writing, though, it's an amount that's at least worth considering -- whether you spend it on this particular keyboard or another. Considering that it will likely outlast your current computer, and maybe the one after that, it can be seen as something more akin to an investment in a decent chair than your regular computer upgrade.

As for the Quiet Pro itself, it's a great entry into the world of mechanical keyboards for those worried that the clickety-clack of a traditional model will be too much for you (or your co-workers) to take. If you're a purist, though, we'd suggest that you try one out before you buy it if at all possible -- or at least keep your expectations in check after placing your order. There's a good chance you'll find the tactility / noise trade-off is worth it, but there is a bit of a trade-off. All things considered, however, it's a keyboard that easily justifies its price tag.