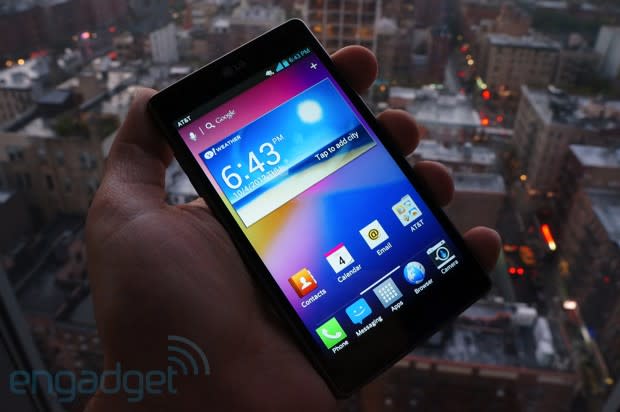 The details have finally come: the LG Optimus G on AT&T will be coming to stores beginning November 2nd, and will go for $199.99 after a two-year commitment. Eager early adopters, however, will be able to head over to the carrier's website to pre-order the device. Let's recap what you're getting for your hard-earned money: a 4.7-inch 1,280 x 768 True HD IPS PLUS display, Android 4.0, a 1.5GHz quad-core Snapdragon S4, 8MP camera (rather than the 13MP module on the global and Sprint models), 2GB RAM and dual-band AT&T LTE. We have a feeling it will be joined in close succession by several other hard-hitting smartphone giants, which means you may have to modify your holiday wish list pretty heavily over the next few weeks.

In this article: 4g, apq8064, att, krait, lg, lg e970, lg optimus g, LgE970, LgOptimusG, lte, mobilepostcross, optimus g, OptimusG, snapdragon s4, snapdragon s4 pro, SnapdragonS4, SnapdragonS4Pro
All products recommended by Engadget are selected by our editorial team, independent of our parent company. Some of our stories include affiliate links. If you buy something through one of these links, we may earn an affiliate commission.