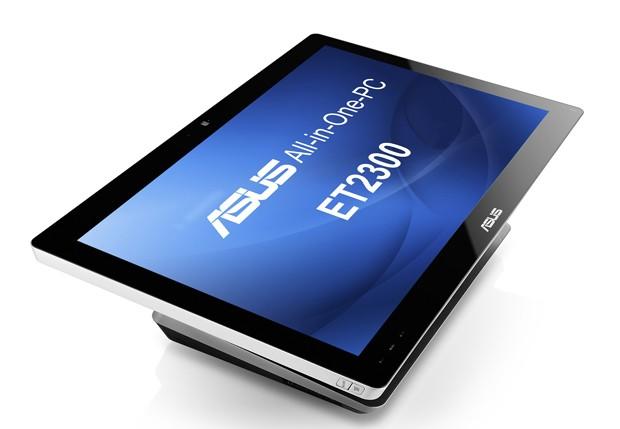 If you're a PC maker launching a new lineup of Windows 8 devices, you're going to look awfully square if you don't have at least one touch-enabled all-in-one to show off. Clearly, ASUS got the memo. Here at a press event in New York City, the company announced the ET2300, a 23-inch desktop whose display can be pushed down to lie basically flat -- a pretty ubiquitous form factor these days. Starting with that IPS screen, it has 1080p resolution and promises horizontal viewing angles of 178 degrees. Under the hood, it runs your choice of Core i3, i5 or i7 processor, with either integrated Intel graphics or NVIDIA's GT 630M GPU. (Even then, you can choose between one and two gigs of dedicated video memory.) Other specs include up to 8GB of RAM, up to 2TB in HDD storage, a slot-loading DVD drive, Intel Wireless Display and optional Thunderbolt connectivity. Additionally, like ASUS' other products (even its tablets and phones), it makes use of SonicMaster's audio technology. We haven't heard anything regarding pricing or availability just yet, but we'll update this post if we do. In this article: 23 inch, 23-inch, 23Inch, all in one, all in one PC, all-in-one PC, All-in-onePc, AllInOne, AllInOnePc, asus, ASUS ET2300, AsusEt2300, desktop, desktops, ET2300, Win 8, Win8, Windows 8, Windows8
All products recommended by Engadget are selected by our editorial team, independent of our parent company. Some of our stories include affiliate links. If you buy something through one of these links, we may earn an affiliate commission.