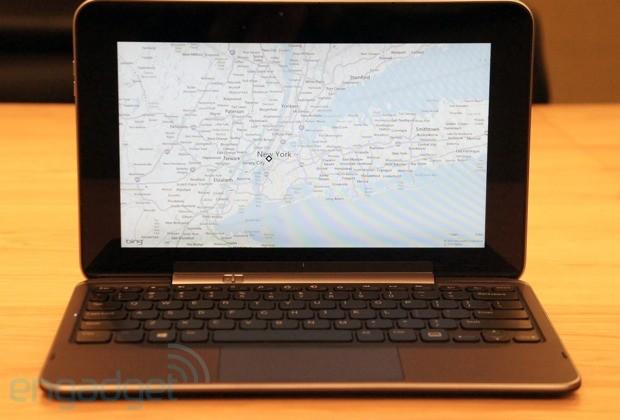 Surface isn't the only Windows RT tablet going on sale this week: Dell's XPS 10 officially starts sales on Friday, though it's actually for purchase now on Dell's site. (It won't ship until mid-December, so don't get too excited.) The tablet starts at $500 for the 32GB tablet by itself, which is right in line with Microsoft's Surface pricing. The 64GB model is priced at $600. Interested in that optional keyboard dock? (Of course you are!) Dell is selling two bundles: one with the 32GB tablet for $680, and another with the 64GB one for $780. Though the keyboard comes at a premium, especially compared to Microsoft's Touch Covers, it offers some things Microsoft doesn't -- namely, a USB port, HDMI output and a built-in battery. Whichever model you choose, the XPS 10 has a 10.1-inch screen with 1,366 x 768 resolution and a dual-core Snapdragon S4 processor clocked at 1.5GHz. While it has 10 point multitouch support on that IPS LCD, there won't be any kind of active pen or stylus tech built in. Hit up the source link for more info, and check out our fresh round of hands-on shots below.

Update: As some of you have pointed out, that $499 starting price includes a one-year service plan, valued at $100. You can opt out of this plan and get the standalone tablet for $399.

Update 2: We've been in contact with Dell about some errors that apparently slipped through to their sales page, and have updated the specs above for the CPU, input support and warranty information. Also, that $499 price will stick, as the warranty cannot be deselected. Check out the PDF linked below for the correct specs until the Dell site is properly updated.

7
In this article: dell, Dell XPS, Dell XPS 10, DellXps, DellXps10, hands-on, Windows, Windows 8, Windows RT, windows rt tablet, windows rt tablets, windows tablet, windows tablets, Windows8, WindowsRt, WindowsRtTablet, WindowsRtTablets, WindowsTablet, WindowsTablets, XPS, XPS 10, Xps10
All products recommended by Engadget are selected by our editorial team, independent of our parent company. Some of our stories include affiliate links. If you buy something through one of these links, we may earn an affiliate commission.