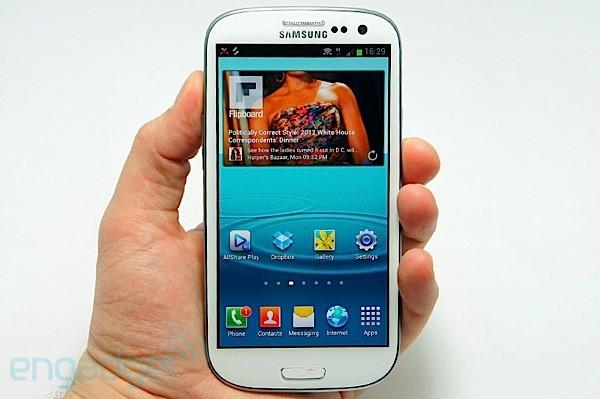 The Galaxy S III has overtaken Apple's iPhone 4S for the first time ever to become the top selling smartphone for Q3 2012, according to Strategy Analytics. Samsung claimed the pole position by shipping 18 million copies of its flagship handset during the quarter, compared to Cupertino's 16.2 million iPhone 4S units. Of course, serendipity is also likely at play, as the iPhone 5 hit shelves towards the end of that period, likely cannibalizing 4S sales -- in fact, the market research firm thinks Apple's new top handset will likely trump Samsung in Q4. That means the Korean giant may have to step up its game, or it'll just be keeping the top spot warm for its arch-competitor. Check the PR after fold for more info.

According to new research from our Country Share Tracker (CST) service, Samsung's Galaxy S3 overtook Apple's iPhone 4S to become the world's best-selling smartphone model for the first time ever in the third quarter of 2012. A large touchscreen, extensive distribution and generous operator subsidies have propelled the Galaxy S3 to the top spot.

Samsung's Galaxy S3 smartphone model shipped 18.0 million units worldwide during the third quarter of 2012. The Galaxy S3 captured an impressive 11 percent share of all smartphones shipped globally and it has become the world's best-selling smartphone model for the first time ever. A large touchscreen design, extensive distribution across dozens of countries, and generous operator subsidies have been among the main causes of the Galaxy S3's success.

Apple shipped an estimated 16.2 million iPhone 4S units worldwide for second place, as consumers temporarily held off purchases in anticipation of a widely expected iPhone 5 upgrade at the end of the quarter.

Samsung's Galaxy S3 has proven wildly popular with consumers and operators across North America, Europe and Asia. However, the Galaxy S3's position as the world's best-selling smartphone model is likely to be short-lived. The Apple iPhone 5 has gotten off to a solid start already with an estimated 6.0 million units shipped globally during Q3 2012. We expect the new iPhone 5 to out-ship Samsung's Galaxy S3 in the coming fourth quarter of 2012 and Apple should soon reclaim the title of the world's most popular smartphone model.

In this article: apple, galaxysiii, iphone4s, iphone5, mobilepostcross, sales, samsung, smartphone, strategyanalytics
All products recommended by Engadget are selected by our editorial team, independent of our parent company. Some of our stories include affiliate links. If you buy something through one of these links, we may earn an affiliate commission.