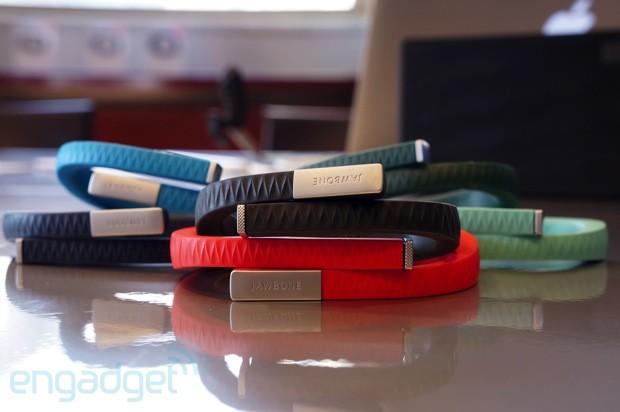 In life, we're often told the best-learned lessons are those spurred by mistakes. In Jawbone's case, its plague-ridden Up wristband from last winter turned out be a sweeping education. So much so that the Jambox-maker now refers to the launch as an accidental "beta" program; a public exercise in wearables R&D that ended in an official apology and full refunds.

Sounds extreme, but those missteps led to a ground-up reinvention for the product: the company just announced a new version of the band, which goes on sale today for $129 with necessary improvements in tow: a refined mold, reinforced water-resistance and a more robust iOS app. In advance of this v2.0 launch, we sat down with the company's VP of Product, Travis Bogard, to find out just what went wrong with its ambitious first effort, how it got fixed and what new innovations users can look forward to this time around. So, follow along as we look back at the growing pains that spawned Up's rebirth. It's not hard to recover from a black eye (as anyone who's been in a fist fight would know), but when that blow is self-inflicted, well, the bruising takes on more of an existential quality -- and adds an extra layer of humility. For Jawbone, the public misfire of the original Up meant a return to square one; an examination of the nascent category it was attempting to invigorate and a navel gaze at its own industrial processes. If you'll remember, soon after its launch, owners of that tracking band began reporting issues with defective units: suddenly non-functioning vibration motors (essential for Smart Alarm) or, worse, an inability to sync data. Relying on this abundant user feedback, as well as lab testing, the company began to isolate what exactly was amiss and, along the way, discovered what it meant for a product to be truly wearable.

Turns out, the unseen killer of those first-wave Up bands was none other than water, the very element it was supposedly proofed against. It'd be easy to label this an instance of gross oversight on Jawbone's part, a lack of rigorous testing or false advertising, even, but the company claims innocence. Instead, it points the finger squarely at the industry's sub-par standards testing, claiming the procedures for IPX5, IPX6 and IPX7 require the use of pure, room temperature H2O, not the warm, soapy water involved in everyday hygiene. So, it's no small wonder the bands began to malfunction, as the company found that certain contaminants (e.g., shampoo, body wash) and temperatures affected the band's porosity, thus allowing moisture to collect within and accelerate the oxidation process of internal components. That's not exactly what you'd expect from a product marketed as having one meter (3.3 feet) of water resistance, nor does it make for an easy fix.

Water ingress was just one half of Up's problem. The other headache was what Bogard deemed the "Gumby effect," which, if you're old enough to remember, is pretty much what it sounds like: extreme bending. Perhaps it was poor consumer education on the company's part or the willful mishandling of a sophisticated product with embedded electronics, but that OG Up wasn't made with severe stretching in mind. And it wasn't stress tested for that, either. So though Up may have appealed to some as an intelligent, iOS-friendly snap bracelet, the only snapping that took place was of the fragile components within.

With its Achilles heel now diagnosed, Jawbone took crucial steps to reinvent Up: the creation of a proprietary standard for testing (which involved a device known as the "Big Shower 2000"), an investment in over 100-plus new patents, a product trial spanning 46 weeks and a revised assembly process. The end result is a product that bears a close resemblance to its predecessor on the outside, but has evolved to withstand the duress of 24/7 use with a new outer molding, enamelled wiring and a machined, conformal coating to secure components. Unfortunately, what hasn't changed is how it syncs and charges -- all of which is still handled by the 3.5mm jack. We inquired about a Bluetooth-enabled model -- a feature on our wishlist from last year -- but were told that for the sake of battery life and user experience, the company's opted to stay the course. Bluetooth, it seems, is much too complicated a setup for the mass market demo Jawbone's targeting.

Jawbone hasn't veered away from Up's original mission statement; an attempt to tackle the so-called "lifestyle diseases" prevalent in our first world. In fact, with its relaunch the company's doubling down on this effort and deepening the experience of Up's companion tracking app. And yes, there is an Android version in the works, but the company hasn't disclosed a timetable for its availability. For now, those willing to give Up a second chance will need an iOS device, a decision, we're told, that was made for consistency across screen sizes. But take note that while you can run the application on an iPad, it won't natively scale up to fit the display.

A quick glance at Up's refreshed companion app is evidence enough of Jawbone's determination to right its past wrongs -- the interface is visually appealing, moves fluidly and is incredibly easy to navigate. Having received a much needed makeover from its comparatively barebones earlier incarnation, the tracking application's now laid out with an intuitive simplicity that's on par with its host hardware. First-timers, as well as users that buy back into Up, won't find themselves fussing through clumsily sorted menus or contending with unnecessary load times. What they will find is a richer experience that offers granular insight into fitness, sleep and food patterns, a real-time updating social feed, a dynamic emoticon, usage insights and access to a searchable caloric index.

Users can still snap shots of their meals, but Jawbone's also added the ability to scan bar codes or select specific food items (e.g., Starbucks Skinny Peppermint Mocha) from a sub-menu. Jawbone's also augmented the array of alarm options, adding Power Nap and Idle Alarm, which function much as they sound, alongside the more standard Smart Alarm. Naturally, we'll need to live with this app for a bit before delving any deeper into its nuances and usefulness, so stay tuned for a more comprehensive look in our forthcoming review.

It must be said that we are, indeed, surprised to see a second-generation Up. Following in the wake of the original's botched launch, Jawbone could've taken the easy way out, shelving that product for time immemorial as a one-off dud and refocusing on its tried-and-true Bluetooth speakers and headsets. Yet it didn't. From the looks of this revamped band and polished iOS app, it's clear the company retains an enthusiasm for the lifestyle-tracking wearables space; a category it intends to nail nigh perfectly this time at bat. What remains to be seen is whether or not disillusioned customers are willing to forgive, forget and come back for round two. The Jawbone Up will be available starting today in three sizes -- small, medium and large -- and eight colors at AT&T, Apple and BestBuy stores, as well as the company's own site for $129.

UP™ by Jawbone® Helps you KNOW YOURSELF
A Wristband and App System, Powered by MotionX®, is a New and Innovative Tool for Better Daily Living

SAN FRANCISCO – Nov. 13, 2012 – Jawbone® today announced UP, a new wristband and app system that helps you discover things about yourself that you never knew. UP tracks how you sleep, move, and eat, and gives you personalized insights to help you make smarter choices to feel your best.

"UP marks our commitment to solving everyday problems for real people," said Hosain Rahman, Jawbone CEO and Founder. "We've combined hardware, software, and data, developed 28 new manufacturing processes, and created unparalleled testing standards validated by nearly three million hours of real-world testing. The resulting breakthroughs have allowed us to create the category's first truly day-and-night wearable product – a band that looks great and fits effortlessly into the way you live, along with an app that delivers detailed data with meaningful insights to help you achieve your goals."

UP Gives You a Rich Picture of Yourself
UP utilizes sensors in the wristband, the powerful phone in your pocket, and data in the cloud to deliver a narrative of your daily life:

Sleep: UP employs a revolutionary sleep tracking system. Sophisticated motion-sensing technology tracks micro-movements of your wrist to deliver unprecedented detail including how long it took you to fall asleep, how much light vs. deep sleep you got, how long you were in bed and how many times you woke up during the night. By using the new Power Nap feature or setting the silent Smart Alarm, UP wakes you at the most optimal point in your sleep cycle so you wake up feeling refreshed and alert.
Move: UP gives you comprehensive information about how you move throughout the day, including active vs. idle time, intensity of movement, total steps, distance, and calories burned. UP also vibrates gently to remind you to get up and move when you've been inactive for a specified amount of time.
Eat: UP helps you understand more about your food choices. Simply take a photo of your food to create a visual journal, or go deeper by scanning a barcode or searching the database for more complete nutritional information.
Mood: UP lets you keep track of how you feel throughout the day so you can correlate how your sleep, movement and eating affect your mood.
Insights: UP analyzes your data to deliver highly personalized insights. It reveals connections between different elements of your life, shows how you compare to others, and educates with new information that's tailored for you. The more you use UP, the more powerful the insights will become.

UP is Designed for the Way You Live

UP is a sophisticated computer wrapped comfortably around your wrist and built to withstand everyday life. Encased in a smooth, hypoallergenic, medical-grade rubber, UP is shower- and splash-resistant so that you can wear it all day and night. With up to ten days of battery life you rarely have to take it off to charge.

The UP by Jawbone App is available today for free from the App Store on your iPhone or at www.itunes.com/appstore/. The UP wristband is required for the app.

In this article: hands-on, iOS, Jawbone, JawboneUp, lifestyletracking, TL16TJAWB, TrackingSoftware, video, WaterResistant
All products recommended by Engadget are selected by our editorial team, independent of our parent company. Some of our stories include affiliate links. If you buy something through one of these links, we may earn an affiliate commission.