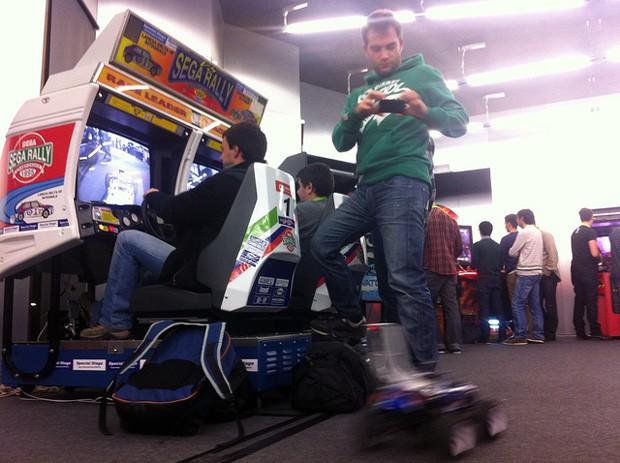 We've seen attempts at recreating video game racing in real life. For Artica and The Arcade Man, there's no desire to preserve the illusion -- they've jury-rigged two Sega Rally cabinets to control the strictly real-world racing experiences of RC cars. Their two-machine setup from the recent Codebits VI event in Portugal yanks the original arcade computing power in favor of an Arduino-powered system that maps the steering wheel and pedals to the tiny vehicles through a wireless Xbee link. The setup does make a nod to traditional video games through the cameras, however: drivers can pick either an arcade-style overhead camera or jump to a cabin-level view. The only true challenge during the build process was to find viable displays for the rigs, as the original CRTs proved too problematic for the retrofit. Some might consider it sacrilege to gut a classic cabinet for the sake of some RC action, but the end result is a racing experience that's at once very familiar and yet surprisingly fresh. Spectators had better watch their feet, though -- the competition might get fierce out there.

In this article: arcade, ArcadeCabinet, arduino, artica, racing, rccar, sega, segarally, thearcademan, video, xbee
All products recommended by Engadget are selected by our editorial team, independent of our parent company. Some of our stories include affiliate links. If you buy something through one of these links, we may earn an affiliate commission.