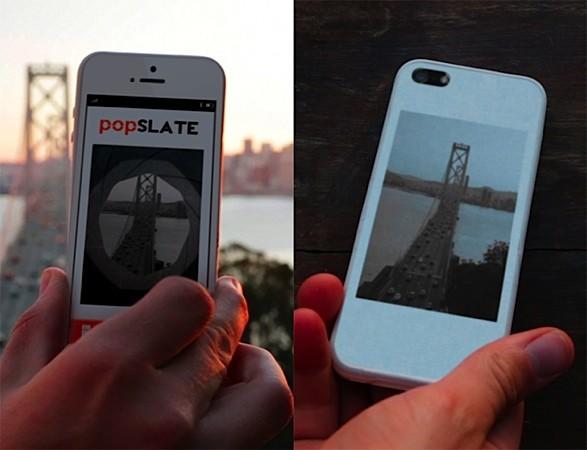 This is pretty darn cool. It's called Popslate -- an iPhone 5 case with a four-inch E Ink screen on the back -- and it's launching right now on Indiegogo for $79 in two colors. Combined with a bespoke social imaging app, it lets you take and share pics, then "pop" them to the back of your phone. Better yet, the always-on, ultra low-power, black and white display becomes a canvas for notifications, sports scores, maps, lists and notes, all just a glance away.

An open API allows third-party developers to design custom apps for Popslate -- including accelerometer support to interact with the backside screen by tapping on it. Imagine a micro e-reader app which uses the E Ink display instead of the main panel to conserve battery.

The company is still in the early stages of development and sadly didn't have a prototype to show us, but it's already gathered a team of talented designers, engineers and developers. It's also secured a partnership with E Ink to use the latest in ruggedized e-paper technology and is hoping to raise enough funds to make Popslate a reality. Two colors are available at launch (black and white) with prices starting at $79 for the first 500 supporters, then $99 and up. Hit the break for the demo video and IndieGogo link.

In this article: Apple, case, e book, e books, E Ink, e reader, e readers, e-book, e-books, e-paper, e-reader, e-readers, EInk, IndieGoGo, iPhone, iPhone 5, Iphone5, mobilepostcross, Popslate, video
All products recommended by Engadget are selected by our editorial team, independent of our parent company. Some of our stories include affiliate links. If you buy something through one of these links, we may earn an affiliate commission.