Sean Parker and Lars Ulrich talk Napster vs. Metallica, hug it out with Spotify 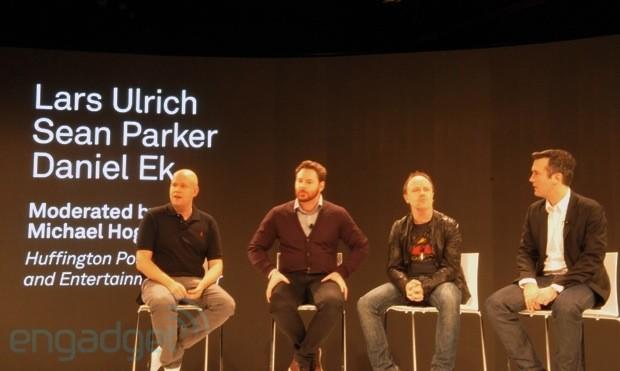 One of today's many, many Spotify announcements was that legendary thrashers Metallica would be coming to the streaming service. As part of the announcement CEO Daniel Ek brought out the bands notoriously outspoken drummer Lars Ulrich and Spotify board member Sean Parker who, as you might remember, had a hand in founding Napster. While there was some broad discussion about the direction of the music industry and the future of music consumption, a large chunk of the half hour-long conversation revolved around the shared history of the two and the legal feud between the pioneering file sharing service and the band. The two were surprisingly cordial, if slightly uncomfortable looking, and delved deep into the details of what both described as a "street fight" between the parties. Ultimately, both admitted that things got blown out of proportion and escalated unnecessarily. But there also seemed to be some admission by Lars that there was an element of Luddism to his band's reaction. To see the entire, extremely interesting conversation, check out the video after the break.

In this article: lars ulrich, LarsUlrich, Metallica, music, napster, sean parker, SeanParker, spotify
All products recommended by Engadget are selected by our editorial team, independent of our parent company. Some of our stories include affiliate links. If you buy something through one of these links, we may earn an affiliate commission.