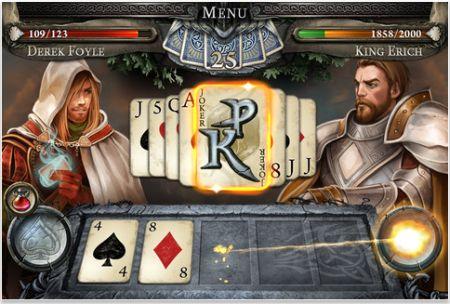 Poker Knight is a game that I was really excited to see coming to the App Store. I'm a big fan of poker, and I'm a big fan of role-playing games, so when that trailer arrived, I was right away looking forward to seeing what this one was like.

Unfortunately, it didn't quite live up to my expectations. It's not a bad game, but the original premise of combining poker with an RPG isn't exactly what this is. Instead, it's a game that combines poker hands with an RPG. You wander around a fantasy world fighting monsters and earning XP as usual, but instead of actually playing Texas Hold'em, you're just choosing cards and putting them together into the best hands possible.

You can see it in action below -- it's not the best card game ever made, but the graphics do look nice, and as you play it more and more, you do start thinking in that poker mindset of seeing how the cards fit together. There's also a magical amulet mechanic later on that mixes up the gameplay a bit more, but basically this is a matching game with that RPG foundation.

It's not bad, and if the game still intrigues you, it's worth the US$1.99 to see how it plays, especially on a newer iPhone or iPad. But unfortunately this isn't exactly the most hardcore poker game around. For that you'll still have to stick to one of the many variants already available on the App Store.

In this article: daily app, daily iphone app, DailyApp, hands, iOS, iPad, iphone, iphone app, IphoneApp, newsletter, poker, poker knight, PokerKnight, review, role-playing game, Role-playingGame, rpg
All products recommended by Engadget are selected by our editorial team, independent of our parent company. Some of our stories include affiliate links. If you buy something through one of these links, we may earn an affiliate commission.