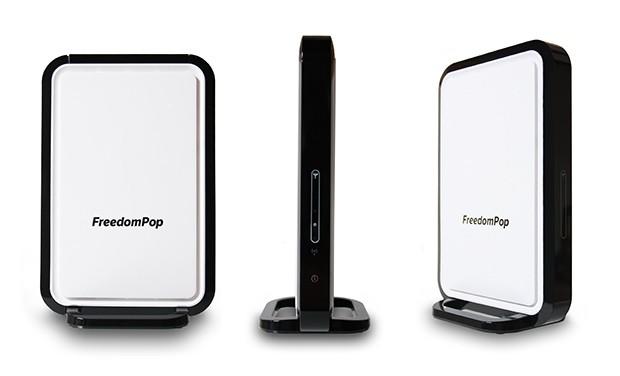 If you happen to live in an area that's served by Clearwire's WiMAX network, then you may be interested to learn of a new home internet service that's very aggressive on the pricing front. FreedomPop has announced a free broadband service that'll offer 1GB of data consumption per month. Not to stop there, heavier users can sign up for a $9.99 monthly subscription that provides 10GB of data usage, or take advantage of a pay-as-you-go option that costs $0.005 per megabyte ($5/GB). Also of note, free users will be able to earn additional data by engaging friends and participating in promotions.

FreedomPop's service will launch in conjunction with the Hub Burst, a 4G modem and router that costs $89, which is available for pre-order now and is set to ship next month. The Hub Burst offers two Ethernet jacks -- useful for your desktop or home entertainment setup -- along with support for 802.11b/g/n (WiFi). While WiMAX is a bit pokey by modern standards, if you're looking to lighten your monthly bills, this alternative to Clear and NetZero may be the ticket, indeed.

Today, FreedomPop will be accepting limited pre-orders for its new home wireless broadband modem scheduled to launch next month

"Major broadband providers, including Time Warner Cable, AT&T, Verizon and Comcast, are pillaging consumers, charging in excess of $500 per year for home Internet," said Stephen Stokols, FreedomPop's CEO. "FreedomPop's early successes has validated consumers are looking for more convenient and affordable ways to consume data. We've already given away more than 15 million MB's of free data and are expanding our Beta to meet the increased demand this holiday season. The Hub Burst puts us in position to offer a compelling alternative for the massive home market much quicker than we initially planned."

FreedomPop Hub Burst preorder users will be given two times the current FreedomPop offering with a minimum of 1 GB of free data each month. Users will also have the ability to earn unlimited data by adding contacts to their network and engaging in partner promotions. The company also offers heavier data users a variety of cost-effective plans, starting at prices under $10 per month, 80 percent cheaper than today's DSL or Cable offerings.

The FreedomPop Hub Burst modem and router boasts wireless antennas to boost speeds as well as Ethernet jacks to connect up to 10 Internet enabled devices, including desktops, TV's and streaming music and video players. FreedomPop will utilize the Clearwire WiMax network, ensuring that installation is as simple as plugging in the device with no time-consuming, complicated installations. Unlike traditional service providers, there are no contracts, no hidden fees and no installation issues.

"The median American household uses under 5.5 GB per month at home, yet spends over $50 for Internet service," said Stokols. "FreedomPop gives these users an opportunity to save hundreds of dollars per year at a fraction of the inconvenience, especially for more moderate internet users."

To pre-order the FreedomPop Hub Burst, go to www.FreedomPop.com while supplies last.

In this article: clear, clearwire, freedompop, hubburst, isp, mobilepostcross, mvno, wimax
All products recommended by Engadget are selected by our editorial team, independent of our parent company. Some of our stories include affiliate links. If you buy something through one of these links, we may earn an affiliate commission.