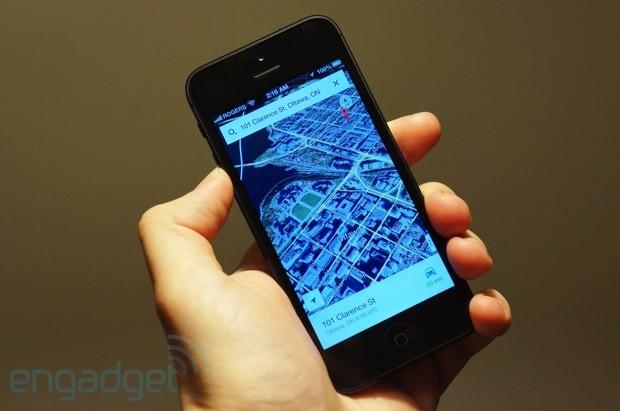 After a surprise launch, Google Maps for iOS is at last available, at least for those of us who leapt on the release as soon as the download hit the servers. In theory, it's the panacea for every iOS user who's been missing advanced mass transit directions or just Google's well-known map accuracy and turn-by-turn navigation. But is it really enough to make up for the current state of Maps, or kick alternatives like Nokia Here to the curb? Or keep those of us on the fence from switching platforms just for a better map service? Read after the break for our quick tour.

From our experience, Google Maps on iOS has trace similarities to its Android counterpart, but it's unmistakably built for Apple's platform. The very clean look of Gmail and other recent Google apps for iOS carries over to the mapping tool. It's surprisingly intuitive, and you start to wonder if the Android version could borrow a few touches, such as swiping upwards to expand directions and location details (including reviews) or tucking the layer toggles into a menu pulled out from the right. Not that the Android version is all that troublesome -- it just leaves more on the screen in some situations, and occasionally requires a few more taps.

Yes, if you're wondering, the major checklist features that users have wanted are here. Mass transit directions and Street View are back. Turn-by-turn navigation is the real novelty for iOS, and we're happy to say it works reasonably well. We only had a limited opportunity to try on short notice, but it covers the vital navigation properly and brings in Google's very natural-sounding voices from the Google Search app and Google Now for Android users running Jelly Bean. We'd pick it over Nokia Here in most cases, and usually Apple Maps. We'll admit that Apple's solution is easier on the eyes, but accuracy trumps prettiness (and occasional at-a-glance readability) any day.

Despite all the positive signs, it's fairly clear from a cursory inspection that Google was focused on the essentials first and niceties second. Whether that's due to a purported tight release schedule or not, it's hard to ignore the missing features when you dig in deep. It's not iPad-optimized, for one. Layers are limited largely to satellite and traffic data, without extras like bicycling or terrain. You can't quickly browse through local attractions without starting a search, or cache maps for offline use. Turn-by-turn navigation doesn't provide a night mode, customizable map layers or manually specified rerouting. None of these omissions necessarily break the deal, but they're features particularly demanding travelers might want or even need.

Is Google Maps for iOS still worth a download, then? We'd say yes, for most would-be navigators. If you truly need offline maps on iOS, alternatives like Nokia Here may be better for the task. Likewise, there's no question that Google's top-flight mapping experience is currently reserved for Android, and you could even point to Apple's own Maps app including complex 3D visuals that Google Maps lacks on iOS, if you need that extra dimension of reference. But for a 1.0 app that took on a new urgency for many of us just this fall, it's quite the achievement.

In this article: apple, google, googlemaps, gps, hands-on, ios, ipad, iphone, ipodtouch, mobilepostcross, navigation
All products recommended by Engadget are selected by our editorial team, independent of our parent company. Some of our stories include affiliate links. If you buy something through one of these links, we may earn an affiliate commission.