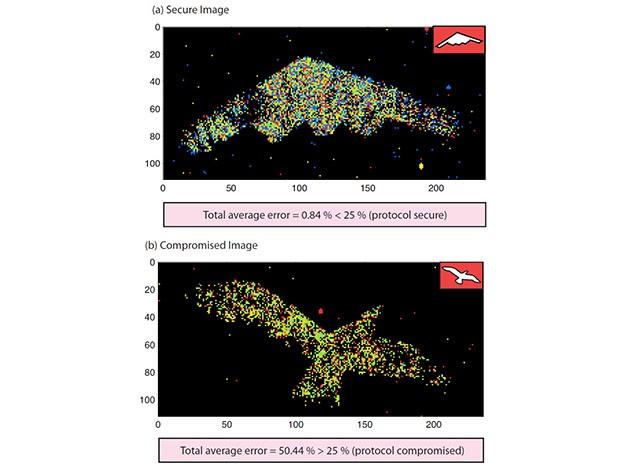 Unfortunately for those in the enemy tracking game, sophisticated aircraft-equipped anti-detection systems can outfox radar by intercepting the signal and sending back a false image, as shown above. However, researchers from the University of Rochester have figured out a technique to defeat such a jamming system that harnesses the quantum properties of light. By polarizing photons before sending them toward objects to be scanned, any attempt at modifying the returning photons caused quantum interference that was easy to detect, in the form of the very high polarization errors shown in the second false image. According to the team, such a a system could "easily be realized and integrated into modern optical ranging and imaging systems," with a little work, making it infinitely more difficult to defeat radar systems. Check the source for more "light" reading, provided that quantum mechanics doesn't break your brain.

In this article: jamming, light, minipost, photons, quantum, radar, UniversityOfRochester
All products recommended by Engadget are selected by our editorial team, independent of our parent company. Some of our stories include affiliate links. If you buy something through one of these links, we may earn an affiliate commission.