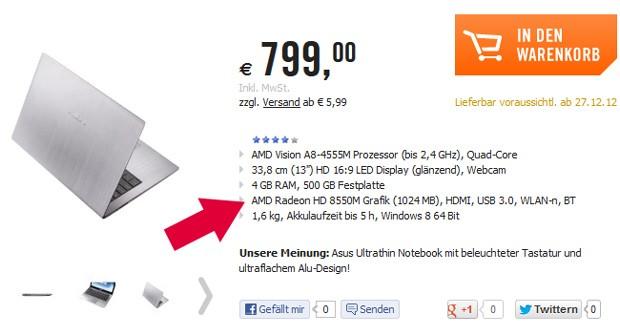 Give or take the odd roadmap, we're mostly in the dark about AMD's specific intentions for 2013. This spec sheet for an unannounced 13-inch Asus Vivobook U38DT drops a couple more crumbs, however, suggesting there'll be a fresh stack of Radeon HD 8000-series graphics chips before too long -- including a 8550M laptop variant with a gig of dedicated memory. It's hard to say anything definite beyond that, and in fact it's even possible that the 8550M will be a last-gen chip rebranded as part of next year's product range -- although that sort of behavior is more typical of NVIDIA. The laptop itself is very similar to the Trinity-powered Vivobook U38N we've already spotted at the FCC, and given that the retailer mentions delivery from the end of December, there's at least some possibility that this model is meant to tie-in with an official announcement at CES -- in which case we'll be right there to bring you a fuller update.

In this article: 8550m, amd, asus, graphics, laptop, leak, radeonhd, vivobook
All products recommended by Engadget are selected by our editorial team, independent of our parent company. Some of our stories include affiliate links. If you buy something through one of these links, we may earn an affiliate commission.