The Sony VAIO Duo 11 was one of about a bazillion Windows 8 convertibles to debut at IFA this summer, and it stood out from a gaggle of flipping, twisting and dockable devices with its slider form factor. And it's equipped to compete with other iterations of the two-in-one concept, with a choice of Core i5 or Core i7 processors, a 1080p touchscreen coated in Gorilla Glass, a sturdy magnesium-alloy design and a generous selection of ports. Sony also bundles a stylus for tapping your way through Win 8 and doing some light photo editing, rounding out a nice list of features that could justify the $1,200-and-up price.

But good specs are one thing, and ease of use is another. We've already tested a slider, the Toshiba Satellite U925t, and we walked away unimpressed -- in part because the design gets in the way of the typing experience. So, does the Duo 11 fare better despite having the same form factor? Join us past the break for the full report. 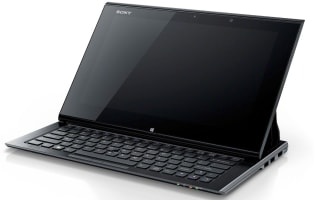 At 2.87 pounds, the Duo 11 is fairly light for a convertible; it weighs a good deal less than Toshiba's 12-inch Satellite U925t slider, which tips in at 3.35 pounds, and it's just a hair heavier than the 2.8-pound Lenovo IdeaPad Yoga 11. Still, 2.87 pounds is a lot to handle for a tablet; the Duo feels rather cumbersome when the keyboard is tucked away. It's 0.71 inch thick, which is just wide enough for HDMI-out, a full-size SD slot and a VGA port. Still, it feels clunky.

The design is uncomfortable in other ways, too. The base extends beyond the display, so the sides of the device feel jagged and uneven. Our thumbs usually settled on the extended lower half, and this put extra weight on our fingers gripping the device from behind. As far as actual build quality goes, though, the magnesium-alloy body feels very solid, especially compared to plastic sliders like the U925t and the MSI Slider S20. The Gorilla Glass-coated screen reinforces the device's secure feel -- it's a welcome feature, especially considering that the panel is always exposed on this machine.

When we first got our hands on the Duo 11 at IFA, we found the hinge quite satisfying, and while we still think the sliding motion feels sturdy enough to withstand some manhandling, collapsing it back into tablet mode feels more wobbly than we'd like. Moreover, there's a learning curve with the slider mechanism: you have to wedge your fingers between the display and the base to push the top half up, which isn't exactly an intuitive maneuver. The design is also rather inelegant: there's a lot going on behind the display, with ribbon cables attaching the tilted panel to the base. We know, we know: having an exposed hinge system is pretty much a given with sliders, but other devices like the MSI S20 at least manage to look a little less messy.

We already mentioned some of the device's ports, but let's circle back and tackle them in order. On the left side, there's a VGA connection, SD card slot and headphone jack. The power button, HDMI out and two USB 3.0 ports line the right edge. Up front above the display is a 2.4-megapixel camera, and a rear-facing shooter with the same resolution sits on the flip side.

When propped up in laptop mode, the Duo 11's display takes up a good third of the keyboard deck. The layout suffers from this arrangement; keys are tiny, if decently spaced, and they offer little travel. Our attempts to knock out a few blog posts on this device were frustrating, as we inevitably made typos every few lines. The chiclets are backlit, which is a nice perk, and an expected one given this machine's $1,200 price.

Keys are tiny, if decently spaced, and they offer little travel.

The slider's design leads to another input sacrifice: there's no trackpad on board. Instead, you get left- and right-click buttons along with a tiny optical pointing stick situated between the G and H keys. The touch buttons are responsive, but like everything else on the keyboard deck they're very small, so you have to make sure your fingers are in exactly the right place. We often had more success selecting small icons with the pointing stick than with the touchscreen, but that doesn't mean this guy is perfect. It's overly sensitive to accidental input, so the cursor will often jump around -- a problem that's especially irksome when you're working in a word processor. We encountered a few instances where our touch input didn't register at all, such as within the Mafia II game, so the pointing stick is an important addition.

And then there's the included N-Trig digitizer stylus, which comes in handy for selecting items on-screen and playing around in a few compatible programs. The pen isn't heavy, but it's weighty enough to give you a good grip, and it's pressure-sensitive so you can control the width of your strokes. We like the two built-in buttons that let you select text or images and erase your scribbles. Annoyingly, the Duo 11 doesn't have a slot for storing the pen, so it could easily go missing. That quibble aside, we found the digitizer to be accurate and responsive.

Sony pre-loads ArtRage Studio Pro, a drawing application that features several different pen and brush tools and lets you create images with layers. The stylus also works with Note Anytime for VAIO, a free download from the Windows Store. In addition to offering a variety of colors and strokes for drawings and text, the program includes handwriting recognition, so you can scribble phrases to translate into typing. When we wrote a few random sentences, the app copied all of our words correctly.

The 11.6-inch capacitive touchscreen boasts a crisp 1,920 x 1,080 (190 ppi) resolution that radiates underneath that Gorilla Glass. We appreciate the generous pixel density here, especially considering that so many Windows machines stick to the standard 1,366 x 768 configuration. Of course, there are exceptions to that rule -- the Acer Iconia W700 and the Aspire S7 notably among them -- but at this point, high-res panels are by no means a given on Windows 8 devices. Colors really pop on this panel, and thanks to IPS technology viewing angles are wide. A drawback of the slider form factor is the fixed angle of the display, but luckily, the IPS panel does a good job of battling glare.

The touchscreen boasts a crisp 1,920 x 1,080 resolution that radiates underneath that Gorilla Glass.

There's a trade-off with this high-res screen: everything looks tiny, even with items sized at 125 percent -- which is especially aggravating when you're trying to click or tap particular fields on web pages. This is when you'll especially love that pointing stick and stylus, since they're more precise than using your fingers on the display.

Visuals may be none too shabby on this machine, but the two small bottom-mounted speakers on the Duo 11 don't produce strong audio to match. Songs come through muffled and a bit warped, though dialogue in movies and games is more accurate. We definitely experienced more sonic fidelity -- and volume -- with headphones. It's never a good sign when we can play songs at full blast in our tiny gadget room without our coworkers outside hearing a note. Suffice it to say you'll want to crank up the volume.

The Duo 11 doesn't stray far from the set of specs we've seen in so many Windows 8 convertibles and Ultrabooks. It packs a Core i5-3317U CPU clocked at 1.7GHz, 6GB of RAM, a 128GB SSD and integrated Intel HD 4000 graphics. Unsurprisingly, systems with such similar configurations deliver nearly the same benchmark scores. The Duo 11 stays near the top of the pack in the PCMark 7 and 3DMark11 tests, coming in slightly ahead of the Satellite U925t and the Dell XPS 12 but trailing the Acer Aspire S7, a non-convertible Ultrabook with a 2.4GHz Core i7 CPU. Sony's slider also turned in respectable read and write speeds in the disk benchmark ATTO, logging a max of 540 MB/s and 525 MB/s, respectively.

In general, we enjoyed speedy, smooth performance on the Duo, with a snappy 10-second boot-up time. The one is caveat is the device's slow accelerometer -- it took two to three seconds to switch orientation, and in the worst cases took up to 20. The Duo delivered 20 to 30 frames per second when we fired up Mafia II, and we saw a max of 40 fps in Batman: Arkham City.

If you've read our reviews of other Windows 8 products, you know by now that they generally don't offer stellar battery life. Among touchscreen Ultrabooks we've tested, the Lenovo IdeaPad Yoga 13 is the reigning champ, with a runtime of five hours and 32 minutes. On our battery test (which involves playing a locally stored video on loop with WiFi on and brightness fixed at 65 percent), the Sony Duo 11's 4,960mAh battery conked out after a modest 4 hours and 47 minutes. The slightly heavier Toshiba Satellite U925t beats that showing, as does the Dell XPS 12.

Sony pre-loads the Duo 11 with a fair share of programs, some of which are harmless background noise (Hulu Plus, Skype and Slacker Radio, for example) and others that are outright annoying. Chief among these is Kaspersky Now, which bugged us with incessant pop-ups -- you'll definitely want to disable those. A handful of Xbox-branded games, such as Adera and Pinball FX2, are also on board.

Naturally, Sony also tacks on a bit of its own software. You'll find standard utilities such as VAIO Care for system diagnostics and PlayMemories for organizing and sharing photos, and there's also ArtRage Studio Pro for creating digital masterpieces with the included stylus. The Duo 11 comes with a one-year parts-and-labor warranty, which includes toll-free phone support.

We haven't exactly been subtle in conveying our misgivings about the slider form factor, but if you're set on this type of convertible, you have a couple other choices. The Toshiba Satellite U925t has nearly identical specs to the Duo, with the exception of having 4GB of RAM instead of 6GB and a lower-res 1,366 x 768 display. Like the Duo, it suffers from a small keyboard, but it does fit in a trackpad and offers slightly longer battery life. At $1,150, it's marginally cheaper, but its plastic build isn't the sturdiest. There's also the $1,099 MSI Slider S20, with an 11.6-inch, 1080p IPS display, a Core i5 CPU and a 128GB SSD packed into an ultra-light 2.3-pound body -- and, notably, you can adjust the screen angle on this device.

Open to venturing beyond the slider category? Prepare to get lost in a sea of options -- heck, we're still weathering the onslaught of Windows 8 machines here at the Engadget offices -- but take comfort in the fact that we've already found some promising ones. The $1,200-and-up Dell XPS 12 is unique, to say the least, with a great 1080p screen that flips inside the hinge. We're fans of its comfy keyboard as well. And then there's the $1,110 Lenovo IdeaPad Yoga 13, a product that almost inevitably comes up in any discussion of Windows 8 convertibles. The 1,600 x 900 screen flips around, the sturdy hinge lets you fold it 360 degrees back, and the Yoga matches those acrobatic tricks with solid performance.

Despite its inherent downsides -- a cramped keyboard chief among them -- there's plenty of appeal to a slider device. It's a tablet and a laptop in one, after all. But, like Smucker's Goober two-in-one PB & J, the VAIO Duo 11 slider is appealing in theory but disappointing in practice. Fact is, the Duo doesn't offer a thin enough design or long enough battery life to cut it as a tablet, and its keyboard is too cramped to make for a good Ultrabook. Yes, the Gorilla Glass display is brilliant, performance is zippy and an accurate digitizer pen is included, but those generous specs don't disguise a half-baked product.