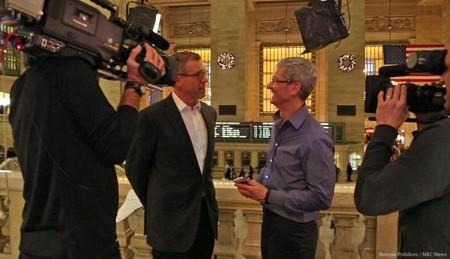 Time Magazine has posted its shortlist for the annual Person of the Year awards, and there's at least one familiar face on there for Apple fans: Apple CEO Tim Cook has made the cut. Along with Barack Obama, Bill and Hilary Clinton and Yahoo CEO (and former Google exec) Marissa Mayer, Cook is under final consideration for this year's award, which will reportedly be announced tomorrow.

The internet doesn't quite believe Cook deserves it: Time's annual fan poll (which is always buried under by a mob of votes from social sites like 4Chan) already chose North Korean leader Kim Jong Un as its choice. But the fan poll is basically just a stunt these days. The final decision comes down to Time editors. Given everything that's happened this year, it's hard to believe that Time will eventually choose Cook as its Person, but then again, who knows? Cook has definitely shined in his role of filling the shoes of Steve Jobs, and Apple has never been more influential in the various fields of tech, business and the creative arts as it's been this past year. So maybe we will see Apple's new CEO crowned tomorrow.

In this article: award, barack obama, BarackObama, bill clinton, BillClinton, iOS, Mac, person of the year, PersonOfTheYear, selection, tim cook, TimCook, time
All products recommended by Engadget are selected by our editorial team, independent of our parent company. Some of our stories include affiliate links. If you buy something through one of these links, we may earn an affiliate commission.