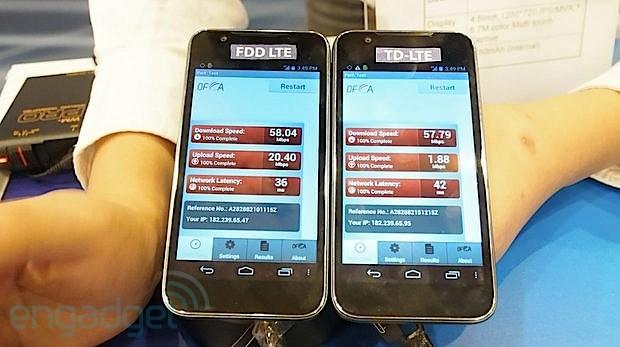 LTE technology is usually divided into two distinct camps, FDD-LTE and TD-LTE, that might as well exist in two different worlds: own a device using one and you can't access the other. ZTE is bringing some harmony to 4G through the Grand Era LTE. The smartphone can connect to both LTE formats on China Mobile Hong Kong's newly dual-mode network, keeping locals in the high-speed zone no matter which 4G format is available. As our friends at Engadget Chinese discovered in a hands-on, however, it's not quite seamless at this stage. Subscribers have to reboot to switch networks, and the Hong Kong take on TD-LTE access doesn't upload as quickly as its FDD counterpart. Even with those bubbles burst, the Grand Era LTE is still a solid phone in its own right, touting a 4.5-inch 720p screen, a 1.5GHz dual-core processor and ZTE's relatively light Mifavor interface sitting on top of Android 4.0. Check our video after the break to get a taste of the phone and the network -- although the clip is in Cantonese, the results are universal.

In addition, ZTE will showcase its FDD/TDD dual-mode MF93E uFi device and the MF825 data card on the new Hong Kong network. Both devices use Qualcomm's MDM9215 second-generation LTE chip platform. The size and average power consumption of the MF93E and the MF 825 have been reduced by nearly a third compared to the first generation LTE devices making them smaller and faster.

"With the growing popularity of the LTE environment in Hong Kong, LTE smart terminal products will become more prevalent in the future, which will also be the model for LTE development in mainland China, further accelerating the maturity of the global TD-LTE industry, " said Mr. He Shiyou, ZTE EVP and Head of the Terminal Division.

TD-LTE continues to gain momentum across the globe. ZTE recognised the potential of TD-LTE very early on and in the last ten years has invested 900 million on TD-LTE research and development and has over 4,000 engineers working on the programme focused on delivering innovations to improve user experience and value. The focus has been on TD-LTE terminals and converged services solutions from the chip to the product through to the solution. Today, ZTE TD-LTE terminal products include a wide range of smart terminals, family integration equipment and innovative terminals such as handsets, platforms, datacards and MiFi/uFi devices.

In this article: android, chinamobile, chinamobilehongkong, fdd-lte, granderalte, hongkong, IcecreamSandwich, minipost, mobilepostcross, mobilepostmini, smartphone, td-lte, video, zte
All products recommended by Engadget are selected by our editorial team, independent of our parent company. Some of our stories include affiliate links. If you buy something through one of these links, we may earn an affiliate commission.