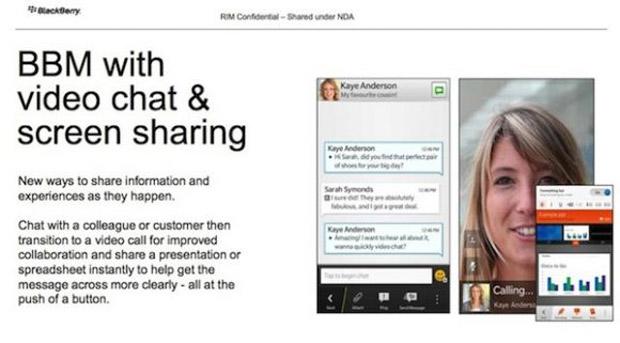 Top dog at RIM Thorsten Heins heavily implied that video chat would be added to BBM when BlackBerry 10 showed up, and now possible confirmation of the feature has come from what are thought to be leaked presentation slides. Originating on CrackBerry's forums, the images have been taken down on various sites, leading us to believe they're legit and that strongly worded requests have led to their removal. Not only do they suggest BBM video chat is coming to BB10, but also the ability to screen share during these video calls. Another slide details a new task manager for the OS called "BlackBerry Remember," which can sync with Outlook and -- based on its description and what was uncovered in the gold SDK -- may include Evernote integration. We've contacted RIM for comment and will update you with any response, but until then, take a look at the slide above and the pair hidden after the break to assess for yourself whether they're the real deal.

Update: Here's RIM's statement, which doesn't really come as much of a surprise:

"We understand that there is a lot of excitement for BlackBerry 10. We will launch the platform on January 30th and until then we won't comment on speculation."

In this article: bb10, bbm, blackberry, blackberry10, BlackberryMessenger, blackberryremember, leak, mobilepostcross, researchinmotion, rim, rumor
All products recommended by Engadget are selected by our editorial team, independent of our parent company. Some of our stories include affiliate links. If you buy something through one of these links, we may earn an affiliate commission.