Latest in About fun 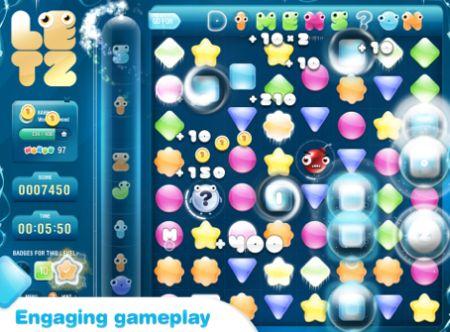 Letz is a game that doesn't necessarily excel in its mechanics -- it's a match 3 game, basically, though there is a fun addition in the form of a word-making challenge as well. But where Letz really shines is in the icing. The sounds and graphics on this one are just pure sugary pleasure -- the kind of great bleeps and bloops that you hear on the floor of a casino when everyone around you is winning lots of money.

Ok, so maybe it's not for everyone, but I am completely charmed by Letz's cotton candy graphics and all the sounds the game makes. Match 3 isn't that complicated a game form, obviously, and that's what you're doing here (though you can collect letters as you match tiles, and then match those letters up into words, including one story word per stage in the campaign as you play through it). But despite the simplicity, the game's big board allows you to chain tiles and shapes to your heart's content, sometimes getting up to a minute or two of dings, rings and rewards for just the right match. An XP system with plenty of objectives also keeps the action interesting, and the whole package is just excellently charming throughout the game's huge amount of content.

Letz (full title, The Story of Zed) is a bargain for just US$1.99 on the iPad. It's a very well-polished game that's almost excessively rewarding, and match 3 aficionados especially will have a great time with it. If you've yet to be convinced, there's a lite version to try out as well.

In this article: about fun, AboutFun, daily app, daily ipad app, hd, iOS, ipad, letters, letz, match 3, Match3, newsletter, review, spelling, the story of zed, TheStoryOfZed, word game, WordGame
All products recommended by Engadget are selected by our editorial team, independent of our parent company. Some of our stories include affiliate links. If you buy something through one of these links, we may earn an affiliate commission.