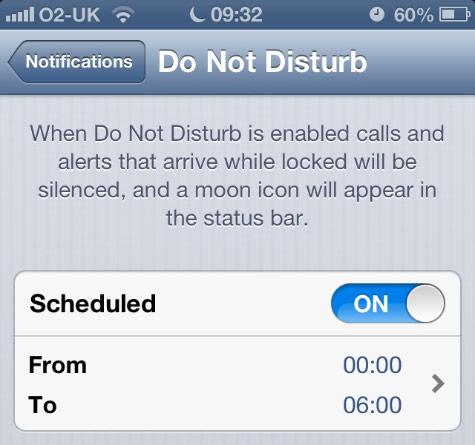 If you're running iOS 6, your smartphone, media player or tablet may be taking a bit longer than usual to shake that post-party hangover. Users are reporting that the latest Apple OS' Do Not Disturb feature remains engaged even after its scheduled period has ended, with the misstep linked to January 1st. As you can see in the screenshot above, the feature fails to flip off automatically, as confirmed by the crescent icon beside the current time -- adjusting the date does seem to offer a temporary fix. When enabled, Do Not Disturb flips the device to silent mode, so you'll need to keep an eye on the screen in order to catch phone calls, text messages and other notifications. The tool does not disable alarms set through the native Clock app, however.

There doesn't appear to be an official fix available, but if you're experiencing this issue, you can cancel that last-minute Genius Bar appointment -- Apple reps aren't likely to have a solution just yet. And, if you've been trying to reach an iPhone owner without success, expect a call back only once they've had a chance to check their device. New Year's bugs seem to be an annual tradition at Apple -- the alarm is a frequent target, and while this is the first year for an extended DND, the feature just launched in late 2012 with iOS 6.

Update: So, apparently Apple didn't get the memo. Cupertino's latest iPhone 5 ad, titled "Dream" and embedded after the break, transports you to the wonderful world of Do Not Disturb. Venus and Serena Williams are playing ping-pong and everything is white. So fun. And when was the ad first released? Just this morning. Didn't you get the notification?

In this article: apple, bug, bugs, DoNotDisturb, ios, ios6, ipad, iphone, ipod, mobilepostcross, video
All products recommended by Engadget are selected by our editorial team, independent of our parent company. Some of our stories include affiliate links. If you buy something through one of these links, we may earn an affiliate commission.