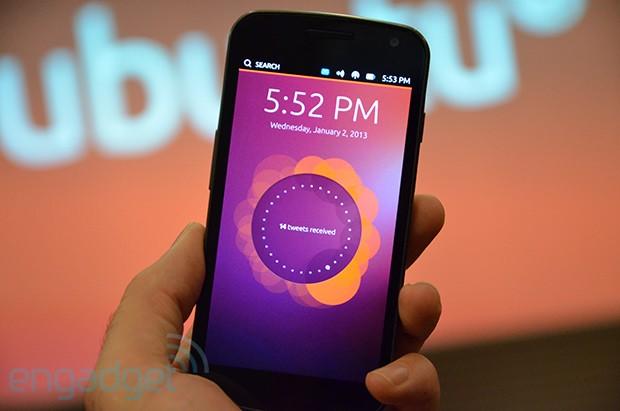 This is no ordinary Galaxy Nexus. Instead of Android, it's running a very different Linux-based OS -- the long-awaited mobile version of Ubuntu -- which comes with a new UI adapted for smaller screens. We've played with the phone briefly and we'll have a proper hands-on video for you shortly, but in the meantime there are a few salient features to report. First and foremost, the UI relies heavily on edge swipes instead of buttons -- much like Windows 8 on a tablet or indeed other mobile OS's like MeeGo, although here each swipe has its own Ubuntu-esque functions. Beyond that, the icons along the top have some interesting features, which will be explained after the break. We're also told that voice control is in attendance, and that an app store is in the works, with a mix of both web apps and native apps -- with the latter type being able to make better use of the hardware.

Speaking of hardware, here's where you might get a twinge of disappointment: there are no immediate plans for actual Ubuntu phones, and no carriers have been signed up yet. Any new phone built for Android with at least a dual Cortex-A9 cores, a gig of RAM and 800 x 400 resolution could run this OS, should a manufacturer see merit in installing Ubuntu instead, and high spec 720p, quad-core phones should do wonders with it. Meanwhile, rather like Ubuntu for Android, this is still an idea looking for a device -- but as ideas go, our initial impression is that it looks like a bright one, especially if you dig Linux and open source. We're told the Galaxy Nexus-compatible build will be available for download within the next few weeks, and Mark Shuttleworth is optimistic that actual devices will ship sometime in early 2014 -- which is quite a ways away. For now, check out the press release, gallery and publicity video after the break.

Update: Our hands-on video with the Benevolent Dictator himself is now live! Ubuntu comes to the phone, with a beautifully distilled interface and a unique full PC capability when docked

"We expect Ubuntu to be popular in the enterprise market, enabling customers to provision a single secure device for all PC, thin client and phone functions. Ubuntu is already the most widely used Linux enterprise desktop, with customers in a wide range of sectors focused on security, cost and manageability" said Jane Silber, CEO of Canonical. "We also see an opportunity in basic smartphones that are used for the phone, SMS, web and email, where Ubuntu outperforms thanks to its native core apps and stylish presentation."

Ubuntu is aimed at two core mobile segments: the high-end superphone, and the entry-level basic smartphone, helping operators grow the use of data amongst consumers who typically use only the phone and messaging but who might embrace the use of web and email on their phone. Ubuntu also appeals to aspirational prosumers who want a fresh experience with faster, richer performance on a lower bill-of-materials device.

The handset interface for Ubuntu introduces distinctive new user experiences to the mobile market, including:

1. Edge magic: thumb gestures from all four edges of the screen enable users to find content and switch between apps faster than other phones.
1. Deep content immersion - controls appear only when the user wants them.
2. A beautiful global search for apps, content and products.
3. Voice and text commands in any application for faster access to rich capabilities.
4. Both native and web or HTML5 apps.
5. Evolving personalised art on the welcome screen.

Canonical makes it easy to build phones with Ubuntu. The company provides engineering services to offload the complexity of maintaining multiple code bases which has proven to be a common issue for smartphone manufacturers, freeing the manufacturer to focus on hardware design and integration. For silicon vendors, Ubuntu is compatible with a typical Android Board Support Package (BSP). This means Ubuntu is ready to run on the most cost-efficient chipset designs.

In bringing Ubuntu to the phone, Canonical is uniquely placed with a single operating system for client, server and cloud, and a unified family of interfaces for the phone, the PC and the TV. "We are defining a new era of convergence in technology, with one unified operating system that underpins cloud computing, data centers, PCs and consumer electronics" says Mark Shuttleworth, founder of Ubuntu and VP Products at Canonical.

Canonical currently serves the leading PC OEMs: ASUS, Dell, HP, and Lenovo all certify the majority of their PCs on Ubuntu and pre-install it in global markets. Over 20 million desktop PCs run the OS today, and Canonical estimates that close to 10% of the world's new desktops and laptops will ship with Ubuntu in 2014. Ubuntu is also wildly popular as a server platform, the number one server OS on the key major public clouds and the leading host OS for OpenStack, the open source IAAS.

In this article: canonical, hands-on, linux, mobilepostcross, smartphones, ubuntu, video
All products recommended by Engadget are selected by our editorial team, independent of our parent company. Some of our stories include affiliate links. If you buy something through one of these links, we may earn an affiliate commission.