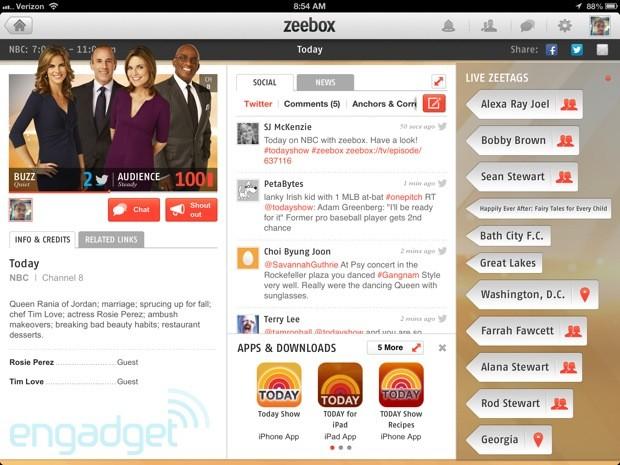 It was around this time last year that Gracenote's embryonic automatic content recognition system for TV emerged under the name "Entourage." Now, it's been picked up by the increasingly popular second-screen app Zeebox, enabling you to automatically identify whatever it is you're watching. Even better, it'll connect you with other users who are also gasping along to the same episode of Pregnant in Heels you are. All the pairing has to do now is dream a better verb for this process before Shazam-ing becomes the legally-uncomfortable term by default

EMERYVILLE, Calif. – January 3, 2013- zeebox will integrate Gracenote Entourage™ Automatic Content Recognition (ACR) into its award-winning app for iOS and Android, enabling it to automatically identify the show you're watching and to deliver a synchronized second-screen experience across live or time-shifted TV.

Gracenote Entourage uses advanced audio fingerprinting to let apps on smartphones and tablets identify TV programs and movies by "listening" to a few seconds of the dialogue or soundtrack. zeebox will use the Gracenote Entourage ACR technology to identify the program the user is watching, either live or time-shifted, allowing zeebox to automatically provide additional information, votes and polls, tweets, presence and transactional opportunities, all synchronized to the program being viewed.

"People love zeebox's program discovery, TV remote control and interactive second-screen experiences. Today that experience is focused on live television. Gracenote technology will allow us to take zeebox to the next level, providing that great interactive and synchronized zeebox experience for both live and recently PVR'd content," said Anthony Rose, co-founder and CTO at zeebox.


The brainchild of former EMI executive Ernesto Schmitt and BBC iPlayer CTO Anthony Rose, zeebox lets viewers discover what's hot on TV – among their friends, top celebrities, or the Twitterverse. The company recently announced a series of strategic alliances with Comcast Cable, NBCUniversal, HBO and others, offering the first such endorsement by major media companies of a cross-channel, TV companion app.
"Through its unique blend of trending data, recommendations and social features, zeebox has led innovation in the market of TV companion apps, and we are thrilled to partner with them," said Stephen White, president of Gracenote. "Real time data about what's hot and trending now is key to the zeebox discovery experience, and Gracenote Entourage will make it fun and easy for viewers to identify and share what they are watching."
Gracenote Entourage is transforming TV as we know it, turning a once passive experience into one where a whole new world of discovery is possible on the second screen. Unique to Gracenote Entourage is its ability to "always listen" and identify what's playing throughout the broadcast. This lets viewers actively identify TV content without requiring them to constantly push a button on their device.
For a demo of zeebox featuring Gracenote Entourage, visit us at The Gracenote Lounge during CES 2013 – The Cosmopolitan Hotel, 4th Floor, Nolita Room 1.

In this article: ACR, CES, CES 2013, Ces2013, Entourage, Gracenote, hdpostcross, Zeebox
All products recommended by Engadget are selected by our editorial team, independent of our parent company. Some of our stories include affiliate links. If you buy something through one of these links, we may earn an affiliate commission.