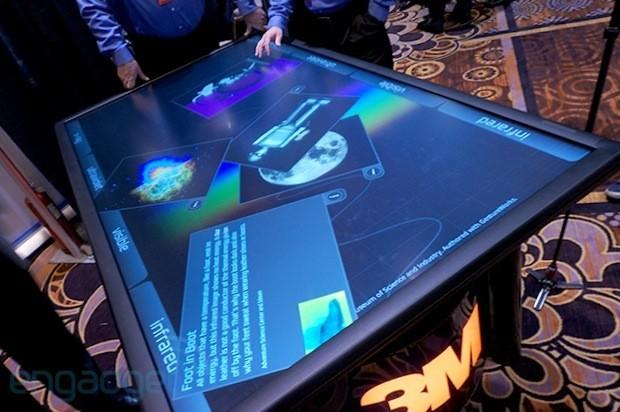 We knew we'd be seeing 3M Touch Systems' monster capacitive display once again, but we had no idea just how massive this year's iteration would be. Taking up residence in a corner of CES Unveiled 2013, the company's latest multi-touch prototype now measures in at 84 inches, far surpassing its 46-inch predecessor, with 100-inch versions waiting in the wings. This particular touch table now supports Ultra HD resolution (4K) and was shown running a software demo currently in use at Chicago's Museum of Science. As you may be able to tell from the accompanying gallery, those floating images aren't of the crispest quality, but that's because the files aren't fully high-res. Of course, tech of this kind isn't necessarily intended for households -- not yet, anyway -- it makes for a more natural fit in commercial environments (think: airports, car dealerships or wireless retailers). At present, the table here on the showfloor is calibrated to support 40 individual touch points, but a company rep assured us it could be configured for up to 60, allowing for large groups of people to interact simultaneously. While touch tabletops of this kind are still quite rare in the wild, expect to see them crop up more commonly in the near future. Check out a video demo past the break. In this article: 3M, 3m Touch Systems, 3mTouchSystems, 4K, 84-inch, capacitive touchscreen, CapacitiveTouchscreen, CES2013, ces2013-highlight, hands-on, prototype, Ultra HD, UltraHd
All products recommended by Engadget are selected by our editorial team, independent of our parent company. Some of our stories include affiliate links. If you buy something through one of these links, we may earn an affiliate commission.