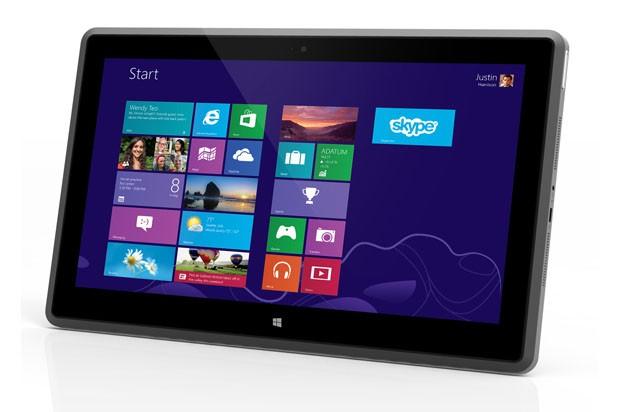 After breaking into the PC market last year, it was only a matter of time before Vizio released its first Windows 8 tablet. The company just announced the Vizio Tablet PC, an 11.6-inch slate running full Windows (i.e., none of this RT business). What's interesting is the combination of specs here: on the one hand, it packs a dual-core, 1GHz AMD Z60 chip, making it among the first Windows 8 tablets with an AMD processor inside. At the same time, it rocks a 1080p display -- not the sort of resolution you'd expect to find on a low-power tablet with a Z-series or Intel Atom CPU. Also, like the rest of Vizio's PCs, this has a Microsoft Signature software install, with zero bloatware. Otherwise, the specs are pretty standard: 2GB of RAM, 64GB of solid-state storage, a 2-megapixel front camera and micro-HDMI / micro-USB ports. Vizio hasn't announced pricing or exact availability just yet, but we hope to get hands-on with this thing very, very soon.

In this article: ces, Ces2013, Vizio, VizioTablet, VizioTabletPC, Windows8, Windows8Tablet
All products recommended by Engadget are selected by our editorial team, independent of our parent company. Some of our stories include affiliate links. If you buy something through one of these links, we may earn an affiliate commission.