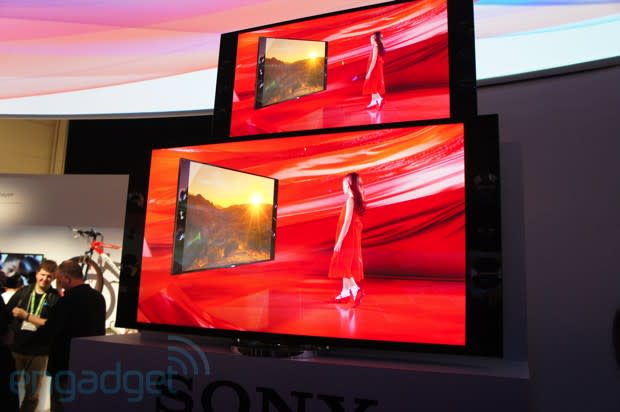 The message of tonight's Sony CES press event? Bigger's not always, better, we guess. The huge reveal on the side of the stage at tonight's event were two new Ultra HD TVs-- smaller siblings of the positively massive 84-inch beast we've already seen. But what these guys lack in sheer size, they make up for a bit with bezel. There's a lot that on either side of the display. That's where the magnetic fluid speakers live, right in the middle of the glossy black expanse.

The overall effect is a TV that looks much wider than it is tall. The TV also looks a fair bit thicker than a lot of the HDTVs current on the market. As for the display itself -- that's great, as to be expected. As lifelike as Kaz suggested on-stage, though some of the colors do look a touch oversaturated as you get up close to the thing. The TV sits atop a shiny silver ring that juts out a bit from the front. The new models measure 65- and 55-inches. They're due to arrive this spring. In this article: 4k, ces, ces 2013, Ces2013, hands-on, hdpostcross, sony, ultra high definition, UltraHighDefinition
All products recommended by Engadget are selected by our editorial team, independent of our parent company. Some of our stories include affiliate links. If you buy something through one of these links, we may earn an affiliate commission.