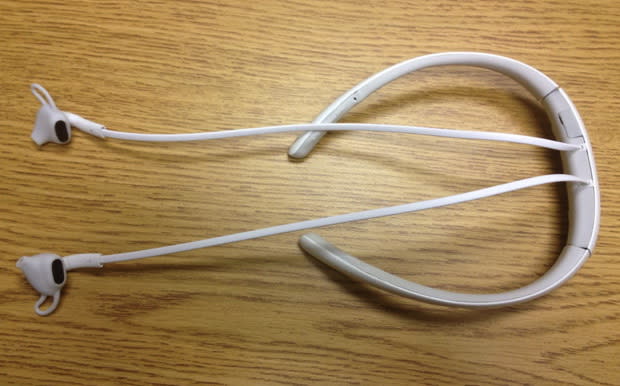 iRiver has snagged Valencell's PeformTek bio-sensing technology for its freshly-announced ON active earbuds. Plug them into your head and the built-in hardware can relay vital statistics like your heart rate and fitness level to your smartphone. The company won't be pinned to a price or a release date, as it's still working on the companion app necessary for the gear to run, but expects to have it ready by March. If you'd like to know a little more, you can always peruse the PR, presented on the posterior of this post.

LAS VEGAS – (UNDER EMBARGO UNTIL TUESDAY 1/8/13 at 9AM PACIFIC TIME, NOON EASTERN) – Valencell , an innovator of mobile health and fitness technology, and iriver Ltd., an award-winning global consumer electronics company, introduced iriver ON today at the Consumer Electronics Show in Las Vegas. iriver ON is the first Bluetooth audio headset powered by Valencell's PerformTek Precision Biometrics™, a licensable sensor technology. Because of the PerformTek sensor technology, iriver ON accurately monitors more real-time physiological data than any other fitness monitor – heart rate, distance, speed, cadence, VO2 max (aerobic fitness level) and calories burned. iriver will launch its own complementary smartphone fitness application, in conjunction with the product.

The retail price will be established next month. The PerformTek logo will prominently appear on the iriver ON packaging. The unit will be available for sale worldwide through sporting goods retailers, consumer electronics retailers, online outlets, and other channels, by March, 2013. The Valencell team will demonstrate PerformTek sensor technology in Valencell's booth in the South Hall #26315, where Valencell will run a series of fitness challenges measuring participants' VO2 max.

"We're excited to partner with Valencell to launch such a compelling product into the mobile fitness marketplace," said Henry Park, iriver's CEO. "There's been great demand, so we're thrilled to be the first to market."

Headquartered in South Korea, iriver is widely known for its digital audio players and other portable media devices.

"We have been targeting licensees that fill key segments and distribution within the industry. Working with iriver is a tremendous opportunity for Valencell to associate with such a respected global brand," said Valencell CEO and co-founder, Dr. Steven LeBoeuf. "The mobile apps and product offerings that PerformTek Biometrics enables are virtually endless, and we are looking forward to seeing several PerformTek-powered fitness monitoring products and applications in the marketplace in 2013."

In this article: CES, CES 2013, ces2013, iRiver, ON, PerformTek, Sport Headphones, SportHeadphones, Valencell
All products recommended by Engadget are selected by our editorial team, independent of our parent company. Some of our stories include affiliate links. If you buy something through one of these links, we may earn an affiliate commission.